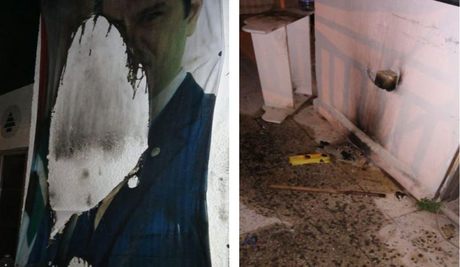 Four people have been arrested over the petrol bomb attack on Kataeb Party's office in Sin el-Fil and the torching of Lebanese Forces chief Samir Geagea's picture in Nabaa, the Internal Security Forces said on Tuesday.

The attacks occurred Wednesday night in a tense atmosphere that followed a verbal clash in parliament between the MPs Nawwaf al-Moussawi and Nadim Gemayel and an angry Ashrafieh demo that was organized by Kataeb and the LF.

An ISF statement said the culprits used two motorcycles in the attacks, identifying them as three Lebanese aged 17, 21 and 18 and a Syrian aged 18.

“Rapid operations were carried out in the area of Nabaa and its vicinity, resulting in the arrest of three of them while one is still on the run,” the ISF said.

The ISF added that its Intelligence Branch also arrested the attacks' mastermind, identifying him as a 24-year-old Lebanese man.

“He asked them to carry out the attacks and gave them money to buy fuel for torching the picture. He also provided them with a Molotov cocktail to hurl it at Kataeb's office in the Mirna Chalouhi area,” the ISF said.

It added that all the detainees have confessed to the charges and that the two motorbikes have been confiscated while the investigations are still underway under the supervision of the judiciary.

The tensions that surfaced on Wednesday were defused during Friday's parliamentary session, when MP Mohammed Raad apologized for Moussawi's insults against slain president-elect Bashir Gemayel – the founder of the LF who was also a senior member of the Kataeb Party.

I am sure after they were questioned that they claimed they were from Israel...