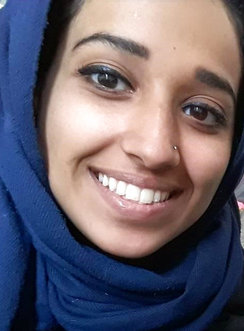 The United States said Wednesday it would refuse to take back a U.S.-born Islamic State propagandist who wants to return from Syria, saying that she is no longer a citizen.

The refusal to admit 24-year-old Hoda Muthana could set precedent and face legal challenges as it is generally extremely difficult to lose U.S. citizenship.

"Ms. Hoda Muthana is not a U.S. citizen and will not be admitted into the United States," Secretary of State Mike Pompeo said in a terse statement.

"She does not have any legal basis, no valid U.S. passport, no right to a passport, nor any visa to travel to the United States," he said.

"We continue to strongly advise all U.S. citizens not to travel to Syria," he said.

Pompeo's statement on the Alabama native -- one of the few Americans among the hundreds of Europeans to have joined the ranks of the Islamic State group in Syria -- is at stark odds with his calls on other countries to bring back and prosecute their own jihadist nationals.

Muthana was born in the United States to parents from Yemen who became naturalized American citizens, according to the Counter Extremism Project at George Washington University.

In late 2014, shortly after moving to Syria, Muthana posted on Twitter a picture of four women who appeared to torch their Western passports, including an American one.

She went on to write vivid calls over social media to kill Americans, glorifying the extremist group that for a time ruled vast swathes of Syria and Iraq.

But with the Islamic State group down to its last stretch of land, Muthana in an interview published Sunday with The Guardian said she had renounced extremism and wanted to return home.

Muthana, who has been detained by U.S.-allied Kurdish fighters, said that she had been brainwashed online and was ashamed of her past support for the militants.

She was married three times to male jihadists and has a toddler son.

Let her male terrorist husbands take care of her and her son. She already torched her passport and made her choice to leave the USA for ISIS she cannot have it both ways.