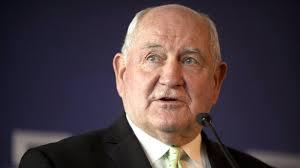 Removing U.S. tariffs on steel and aluminum would benefit the United States, Mexico and Canada, a top U.S. official said Thursday, adding that he was hopeful it will happen "sooner rather than later."

U.S. Agriculture Secretary Sonny Perdue said while he was not in charge of the issue, the expectation was the tariffs would be resolved as part of the newly agreed free trade pact, the U.S.-Mexico-Canada Agreement, and "we're working toward that end."

But that drew immediate retaliation from many countries, including Canada and Mexico, which hit the U.S. farm sector hard.

Perdue said the expectation was that completing the USMCA would lead to removing the tariffs, and while "we are not in charge, we recognize it's in all of our best interests to see that happen."

"We would love for that to happen," Perdue said at an agriculture forum, where he was joined by his counterparts from Canada and Mexico, Lawrence  MacAulay and Victor Villalobos Arambula.

"The sooner we can do that the better we can utilize the agreement we've made through USMCA," Perdue said.

He told reporters he had raised his concerns with Trump, who "listens" but has "a different opinion regarding the benefits of tariffs."

Removing the tariffs among the North American partners would be "great incentive for ratification," of the new free trade deal, Perdue said.

"The sooner we can do that, the better we can utilize the agreement we've made through USMCA."

"We need steel and aluminum tariffs off," he said.