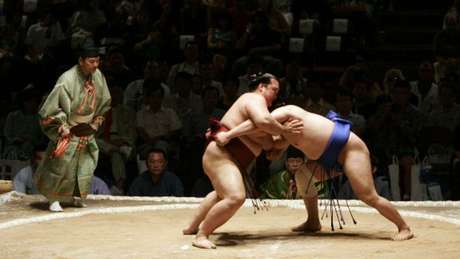 Japanese sumo officials have introduced a crackdown on beards, calling them "indecent" and telling wrestlers they must look spick and span during competitions under strict, new rules on personal grooming.

The draconian whisker ban is part of fresh regulations also barring tattoos and long nails, a sumo spokesman told AFP on Wednesday, as the authorities look to clean up the image of Japan's roly-poly sport.

"It was stipulated that items such as long nails, tattoos and beards grown out of an excessive wish for good luck shall be banned," said the spokesman for the Japan Sumo Association (JSA).

Superstitious sumo wrestlers often decline to shave their beards during tournaments as they believe it brings them luck, but the sumo association have decided they will no longer tolerate such slovenliness.

"Wrestlers must preserve their personal hygiene," JSA elder Oguruma told reporters after a board meeting.

"Officials and referees will be on the lookout. The sumo ring is sacred and it's important spectators don't see anything unsightly."

Grand champion Kakuryu said: "It's an important point so we must absolutely adhere to it."

The ancient sport of sumo has been tarnished by a series of scandals in recent years -- from allegations of bout-fixing and the involvement of organised crime to drugs arrests and severe bullying, the most serious case resulting in the death of a teenage wrestler in 2007.

Grand champion, or yokozuna, Harumafuji was charged over a brutal assault on a rival wrestler while out drinking in 2017, ending his illustrious career.

Believed by historians to date back some 2,000 years, sumo was plunged into further controversy when women who rushed to the aid of a local mayor who had collapsed during a speech were repeatedly told to leave the ring, creating a flurry of embarrassing headlines.

The JSA was forced to make a grovelling apology after being accused of deep-rooted sexism, but just days later a female mayor from the western city of Takarazuka was barred from delivering a speech inside the sandy ring.

To add insult to injury, the gaffe-prone JSA was slammed again for trying to prevent girls from participating in a children's sumo event, citing "safety concerns".