After IS, Mosul Tackles Another Terror: Super-Resistant Bacteria 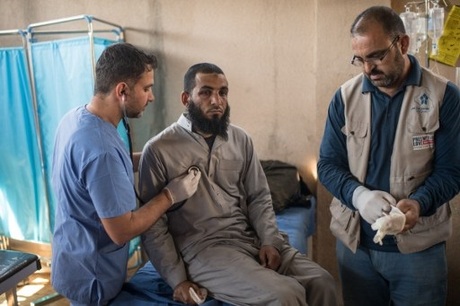 Explosives left behind by the Islamic State group in Iraq's Mosul took 12-year-old Abdallah's left leg, but another kind of terror may cost him his arm: antibiotic-resistant bacteria.

Doctors around the globe are sounding the alarm over bacterial infections immune to modern medicine, but their prevalence in Mosul -- where thousands of patients are struggling to recover from severe war wounds -- can be even more dangerous.

"I have a bacteria -- bacteria are bad," said Abdallah Ali Ibrahim matter-of-factly, leaning against the crutches that support his right and only leg.

"Whenever I go outside, I have to put on a gown and gloves, and sterilise my hands," he adds from his isolation room at a Doctors Without Borders (MSF) hospital in Iraq's Mosul.

The city was controlled by jihadists for three years until Iraqi forces backed by an international coalition ousted IS in 2017.

It emerged ravaged, its streets littered with unexploded mines, one of which detonated in August 2018 as Abdallah and his older brother walked to the market.

The explosion killed Abdallah's brother and sheared off the younger Iraqi boy's left leg and most of his left arm.

But after five surgeries and endless consultations in three of Mosul's hospitals, Abdullah's health kept deteriorating.

"My son wasn't responding to medication. Whatever they would give him, his body wouldn't react," his father recalled.

"The kid was collapsing," the 49-year-old told AFP.

It wasn't until January that Abdallah was referred to MSF's special facility in eastern Mosul, where doctors diagnosed him with a bacterial infection resistant to antibiotics.

The World Health Organization says antibiotic resistance constitutes one of the biggest threats to global health, with illnesses like pneumonia and tuberculosis evolving into forms harder to treat with normal medication.

In the Middle East, antibiotics are easily available over-the-counter and therefore over-used, allowing bacteria to develop a tolerance.

Zoom in on Mosul and the problem is even more acute.

He described a deadly cocktail: decades of unregulated antibiotics use among Iraqis, poor health generally across Mosul's population during IS rule, war wounds from months of fighting, polluted water sources, and a healthcare system in ruins.

The number of hospital beds in Mosul province dropped from 6,000 before the jihadist takeover to 1,000 by the time IS had been driven from the city.

Since opening in April 2018, MSF's facility has treated more than 130 patients, nearly 40 percent of them suffering from multi-drug resistant infections.

One man among them had sold his house to afford costly operations that ultimately did not address the root infection.

Another spent 30 years bouncing from hospital to hospital because of a wound sustained in the 1980s Iran-Iraq war.

Like Abdallah, they were treated in one of the facility's 10 isolation rooms "to keep this bacteria limited to the patient and prevent it from spreading to medical staff, relatives, or nurses that provide daily care," said Bakri.

In a sign of the prevalence of these super-infections in Mosul, all 10 rooms were occupied during AFP's recent visit, with part of an adjacent ward temporarily sectioned off to isolate another three patients.

"People become bored, upset. They have more time to think about past traumas in their life," said Novakovic, 31.

"It's especially more difficult for children because they like to go out, to play, to be very social with other people."

Layla, a 25-year-old patient from west Mosul, has spent most of her two weeks at the MSF facility dreaming about a family reunion.

"The first thing I want to do when I get out is just walk around the houses in Mosul and see my son. I can't imagine how happy I'll be," she said.

Her left leg was wounded during the last stages of the Mosul offensive in 2017, but her infection has kept it from healing.

She pulled back her blanket to reveal black plates screwed into her left shin.

"I went to five different doctors for seven surgeries, three of which failed. They'd give me medicine but nothing would happen," said Layla.

She was ultimately referred to MSF, who took a bone and skin sample to confirm her bacterial infection.

Although it may take a month to treat, Layla said things are looking up at last.

"I was so relieved. We finally knew the reason I wasn't healing."