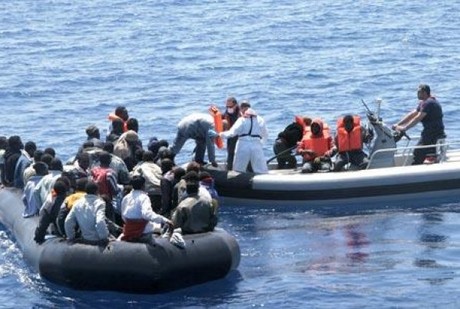 Moroccan authorities said Friday the navy had rescued 21 people after a boat carrying migrants sunk in the Mediterranean, with a rights group saying 45 others had drowned in the incident.

The group's director Helena Maleno wrote on Twitter that there were a total of 67 people onboard the boat and that seven women were among the survivors.

"Only one body has been recovered," she said.

A senior Moroccan official refused to confirm the death toll given by Caminando Fronteras, but said the navy had rescued 21 people.

A second human rights organization, AMDH-Nador, confirmed to AFP that one body had been taken to a local hospital after the navy rescue operation.

In the wake of the incident the Spanish coastguard said they had offered to help Morocco and sent a helicopter to assist.

The issue of migrants making illegal crossings to Europe is highly sensitive in Morocco and the authorities are often cagey about giving details.

In January Caminando Fronteras reported that 50 migrants from Mauritania drowned off the Moroccan coast, but the authorities never confirmed the deaths.

The NGO alerts naval authorities to migrant boats in distress at sea as they attempt the crossing to Europe.

Activist Maleno said this month that a Moroccan court has dropped human trafficking charges against her, saying it sets a precedent for her struggle to save lives at sea.

Last year saw a "substantial increase" in arrivals to Europe along the western route from Morocco, with over 65,000 people making it across the Mediterranean there, the European Union has said.

The International Organization for Migration says over 2,200 people died trying to make the perilous sea journey to Europe in 2018.

Moroccan authorities say they stopped 89,000 people from sub-Saharan Africa and Morocco from making the journey during the year and rescued 29,715.