'Horror & Anger' in Christchurch Hospital as Medics Battle to Save Lives 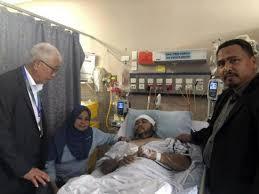 In a city battered by quakes, Christchurch's medics were tragically well-schooled in tackling mass casualty events -- but none could have prepared for the injuries unleashed by a white supremacist with assault rifles bent on mass murder.

Doctors, surgeons and nurses have been working around the clock at Christchurch Hospital since Friday's mass shooting at two mosques, frantically trying to stem bleeding, patch up shattered bodies and save lives.

On Sunday, 34 patients remained in the hospital in Christchurch, twelve of them still in critical condition.

Another of the injured -- four-year-old girl Alin Alsati -- was in intensive care at a specialist children's hospital in Auckland.

Greg Robertson, the chief surgeon at Christchurch Hospital, spoke on Sunday of the sheer magnitude of Friday's massacre.

"Horror, stunned, anger," he said, describing how his team of doctors, nurses and surgeons felt as the wounded poured in -- initially in private cars and then in an ever-increasing stream of ambulances.

This is not the first time the city has dealt with mass casualties.

A series of earthquakes in 2010 and 2011 killed more than 180 people and left many more injured, honing the medical skills of the city's doctors to deal with a sudden influx of complex wounds.

"I don’t think there's any doubt the earthquake did have a bearing on it -- the old adage practice makes perfect works on a lot of things and that’s part of our processes," he said.

But he admitted the horrifying, man-made nature of the latest tragedy had a much greater psychological impact on staff.

"The earthquake was something that we couldn't control,' he said. "It's the fact that someone has done this to our people, our friends, our colleagues, this is just unbelievable."

The kind of injuries surgeons were facing this time around were also particularly horrifying.

Robertson said his teams do sometimes encounter gunshot wounds but never on such a scale.

New Zealand usually witnesses only 50 murders a year. Suddenly one town had that many people murdered in a single day and dozens more wounded -- some struck by multiple bullets.

Many of those brought to the hospital have been in and out of operating theatres multiple times, as surgeons prioritize the worst parts of the injuries -- such as stemming the bleeding, clearing blocked airways, trying to save limbs -- before dealing with the less severe wounds.

"I guess that's reflected in the fact we've had only one death in a patient that arrived at the hospital. Those who got here, have a chance," Robertson said.

It is likely Pakistani national Mohammed Amin Nas only survived because of the paramedics.

"He took out this big gun and just shot at us as we were running," Yasir said.

His father was struck four times. Yasir called emergency services who spent 10 minutes treating his father where he lay before rushing him to hospital.

He has been into surgery three times and remains in intensive care.

On a normal day, Christchurch would have three acute surgery theatres operating. On Sunday, seven were up and running with people working around the clock.

Tarrant appears to have chosen ammunition designed to cause maximum trauma, Robertson said.

"These are not something that goes through," he said, referring to the type of bullets. "We've got a lot of fragments, shotgun injuries."

He said those treating patients would inevitably have their own traumatic memories.

"There will undoubtedly be, as we saw after the earthquakes, a delayed mental stress type response to this whole thing."

For now, he said, people were focused on saving lives. But colleagues would keep a close eye on each other in the weeks ahead.

"Most people are coping with things pretty well when you're doing things," he said.

"It's when you go home and you think about it, that's when the issues start to declare themselves."