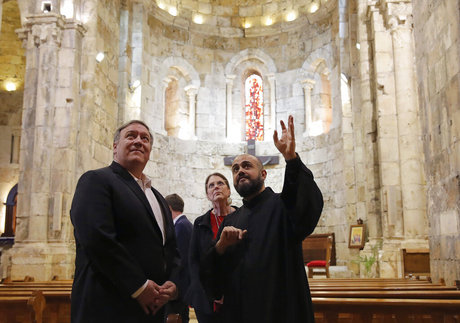 U.S. Secretary of State Mike Pompeo and his wife Susan spent much of the second and last day of their visit to Lebanon touring historical churches and a centuries-old citadel in the coastal city of Byblos on Saturday.

The tour in Byblos and a nearby village came a day after Pompeo blasted Hizbullah and called on the Lebanese people to stand up to its "criminality."

His visit came amid tight security as roads were closed before his motorcade drove through Byblos and Beirut while Lebanese army sharpshooters took positions on rooftops. Some of the sites he visited, including churches, were closed to the public during his hourslong tour.

Pompeo began his day by visiting the site where a new U.S. embassy compound is being built then drove to the village of Behdaidat northeast of Beirut where he visited the 13th century Mar Tadros, or St. Theodore church. The State Department awarded a $44,000 grant through the Ambassador's Fund for Cultural Preservation to support the conservation of the church.

Later, he visited two other churches in this coastal city renowned for its ancient Phoenician, Roman, and Crusader ruins where he was greeted by priests who briefed about the history of each church.

The last site to be visited in the ancient city was the Byblos Citadel built by the Crusaders. Pompeo toured the citadel as Tania Zazen, director general of antiquities in Byblos, accompanied him recounting the city's history.

In 2011, the State Department awarded a grant $93,895 to support the conservation of the main tower of the 12th century citadel at the archaeological site of ancient Byblos, a World Heritage site.

The delegation afterward went to a restaurant by the Mediterranean where they had a meal of cold and hot authentic Lebanese dishes, known as Mezza, and grilled lamb chops and chicken.

"Spoke about the importance of protecting and defending religious diversity and opportunity" with Bishop Audeh and how they enrich every country," Pompeo tweeted after the meeting.

Around sunset, his plane took off back to the U.S. ending a Mideast tour that also included visits to Kuwait and Israel.

Pompeo renewed his attack on Hizbullah and its main backer Iran, blasting the country's Supreme Leader Ayatollah Ali Khamenei and Qassim Suleimani, the commander of Iran's elite Quds Force, saying their aim is to control Lebanon.

"They want to control this state. They want access to the Mediterranean. They want power and influence here," Pompeo said in an interview with Sky News. He added that "the people of Lebanon deserve better than that, they want something different from that, and America is prepared to help."

When told that the Lebanese president and prime minister are not on the same page, Pompeo responded: "Yeah, I don't think that's true. I think that's false."

Definitely they are in same page, Hariri needs money desperately and Aoun loves his position, so they both happily eat in the hand of hizbollah, all the rest is fake to deceive the stupid MBS and going along with America that doesn't really care as long as it can profit from the actual status quo

Definitely they are in same page, Hariri needs money desperately and Aoun loves his position, so they both happily eat in the hand of hizbollah, all the rest is fake to deceive the stupid MBS and going along with America that doesn't really care as long as it can profit from the actual status quo