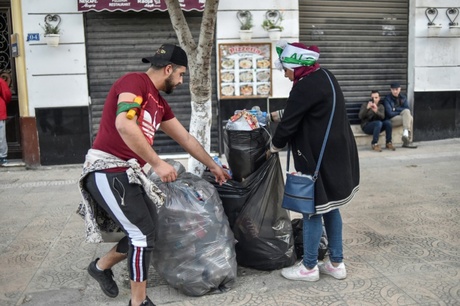 A group of Algerian opposition parties and unions have proposed a "roadmap" to end a political crisis and weeks of protests sparked by the veteran president's bid to stay in power.

President Abdelaziz Bouteflika said on February 22 he would run for a fifth term in April 18 elections, despite concerns about his ability to rule, triggering an outcry in the country which has since been gripped by demonstrations.

The 82-year-old, who uses a wheelchair and has rarely appeared in public since suffering a stroke in 2013, earlier this month said he would pull out of the race.

But he also postponed the elections, meaning he will stay in power until polls are held.

Bouteflika's current mandate expires on April 28 and proposals agreed at a meeting between opposition parties and unions call for a six-month transition period from that date.

The roadmap stipulates the creation of a "presidential body" that would run the country during the transition period and which would be comprised of "national figures known for their credibility, integrity and competence."

But members of the body should not run in future presidential elections nor back any candidates in the poll, the statement seen by AFP said.

The proposals were made during a meeting attended namely by the party of Bouteflika's key rival Ali Benflis, a former prime minister who has joined the opposition, and the main Islamist party, the Movement for the Society of Peace.

Algeria's opposition however has been marginalized by the protest movement, which has been largely led by students angry with the country's political system.

The proposals come a day after hundreds of thousands of Algerians demonstrated nationwide for a fifth consecutive Friday, demanding that Bouteflika stand down and calling for regime change.

On Saturday, around 1,000 lawyers rallied in the capital Algiers chanting "we're fed up" with this government and calling on the political system to "go away."