Iran to 'Resist' Trump Decision on Israel's Hold over Golan 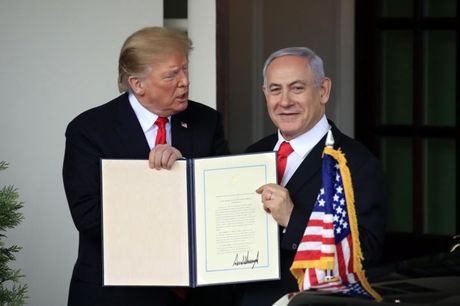 Iran's president said Friday that Iranians would "resist" the Trump administration's acceptance of Israel's control over the occupied Golan Heights, adding his voice to many Arab nations, including a number of U.S. allies, who have denounced the U.S. decision.

Hassan Rouhani said the U.S. move is "trampling on international regulations about the Golan." Iranians too "should resist and that way gain victory" over the U.S. and Israel, he said.

Israel seized the Golan in the 1967 Mideast war after Syria had for years used the strategic plateau to shell northern Israel.

Meeting in the Turkish Mediterranean coastal city of Antalya on Friday, the Turkish and Russian foreign ministers also denounced the decision.

Turkey's top diplomat, Mevlut Cavusoglu, said the decision "does not add to the region's peace and stability, on the contrary, it creates unrest and chaos in the region."

"It is out of the question for us to accept and recognize such a decision," he added.

Iranian Foreign Minister Mohammad Javad Zarif said on Thursday the decision is a reminder to Arab and Muslim countries that U.S. and Israel "will steal your lands."

Iran is full of hot air. If they want to resist Israel then let them do it. Instead Israel bombs their existence in Syria and they do what in return? kill more Syrians and Arabs.

How exactly do they intend to resist? By using their vassals Hizballah to do something? Even Nasrallah knows that would be useless.