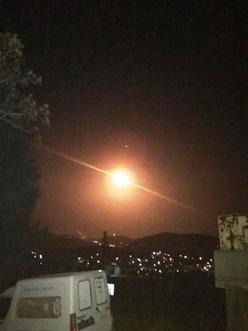 NNA said Israel conducted the mock raids at dawn and its airplanes flew at a low altitude over the city scaring the residents.

Moreover, residents of Wadi Khaled area near the border with Syria woke up to the sounds of missiles fired at the Syrian territory from Lebanon’s airspace, said NNA.

SANA quoted an unnamed military official as saying the airstrike near the town of Masyaf, in Hama province, hit a military academy widely known as the Accounting School. It said Israeli warplanes fired missiles toward Syria from Lebanon's airspace and that Syrian air defenses shot down some of the missiles.

@POS
Nor was it bombed on May 14, 2018 yet your terrorist gang leader warned the 'zionist' enemy “the next response would be in the heart of occupied Palestine".

ahlan bil jiran. they brought light with them, how nice!

I am Lebanese like ALL LEBANESE m14, m8, and independents who consider Zionists the ENEMY. You could ONLY be a Zionist scum or an Antwan Lahd traitor. Why don't you try to step into Lebanese territory and see what happens to you?

Be original for once Instead of copy pasting... you’re boring Mowaten Irani.

Given that real Jews are the same as Arabs and Palestinians. The Palestinians were always on that land, a long time ago they were Jews at some point, his comparison with Rhodesia or South Africa is irrelevant. His religion, Shiism was founded by Abdallah ibn Saba, a Yemenite Jew...

Something is malfunctioning in his brain.