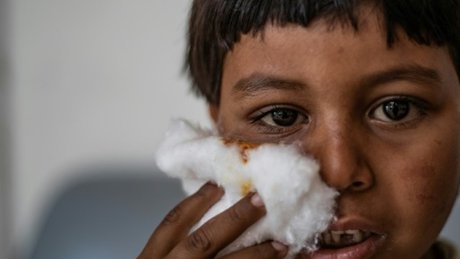 Inside a dank clinic in the north of war-torn Syria, a girl covered in scabs wails and tries to wriggle out of her mother's arms to escape a nurse's needle.

Gently holding fluffy cotton wool over her eyes, the male health worker injects a transparent liquid into the crusty blemishes on the tip of her nose.

She is one of hundreds in the northern province of Raqa to be suffering from leishmaniasis, a skin disease caused by a microscopic parasite spread by sandflies.

The illness is endemic to Syria, the World Health Organisation (WHO) says, but has become more prevalent during the eight-year civil war.

Dozens of children and adults are seeking treatment between the damp-smelling walls of the health centre in the northern town of Karama.

Among them, 15-year-old Shaza al-Omar awaits her turn.

"I've got some on my leg, my sister's got 11 lesions on her face, and my brother has some on his eye," says the teenager, draped from head to toe in black.

Not far off, a father tries in vain to pacify his toddler daughter, who screams as the nurse injects solution into lesions on her face.

Once it is over, he carries her out of the clinic clutching a large packet of potato crisps.

A woman sits on a stretcher, an ailing leg stretched out in front on her, as a nurse injects medicine into one blemish after another.

Many were in northern and northeastern areas rocked in recent years by clashes to expel the Islamic State group.

At the health centre in Karama, Wadha al-Jarrad, 55, has rushed in to ask about treatment for her family -- her grandchildren, her daughter-in-law, and even her elderly husband.

"He's always scratching it until it bleeds," she says of her husband's sore on his hand.

"He itches it, and I tell him not to," says Jarrad, a black and white scarf wrapped around her greying hair.

"We can't sleep at night because of all the flies," she adds.

Leishmaniasis is usually linked to poverty, poor sanitation, and malnutrition, WHO says, factors likely compounded by the war.

Across Karama, insects hover over piles of rubbish between rows of modest houses, some still bearing scars of battles that resulted in Kurdish-led forces kicking IS out in 2017.

Younes al-Naeemi, the manager of the Karama health centre, says the clinic has received 4,000 cases of leishmaniasis from the town and surrounding villages since April last year.

"Marshes, humidity, the house's proximity to farming land, as well as widespread rubbish" have fuelled the spread of the skin condition, he says.

But lack of awareness has also compounded the problem.

Some people "come immediately after discovering they have been affected, while others don't do anything until it gets worse and treatment becomes much harder," he says.

"Treatment is available, but awareness is more important," he says.

After a peak of almost 6,800 cases in Raqa province last year, WHO says there has been a decline in cases at the start of this year.

The international organisation has distributed mosquito nets, provided medicine to treat the disease, and supports six health centres in Raqa, including in Karama.

But it warns the rates could again rise as the weather becomes warmer.

"Sandfly breeding usually peaks when the temperature starts to rise in spring and summer," WHO spokesman Yahya Bouzo said.

"Unless prevention measures are taken, the number of cases is expected to" increase.

But Karama's residents say their rural town is neglected.

They complain of a lack of services including regular trash pick-ups.

Hussein Hamoud, 50, says official measures taken to counter the spread of the disease were simply not enough.

"They once sprayed insecticide inside the houses, but then they never did again," he says.

"Nobody cares. If there was even the slightest concern, this would not have happened," he says, referring to leishmaniasis.

At a primary school in the nearby village of Jadeeda, a young boy sits upright in his seat, a blemish on his cheek.

Outside the classroom, school director Abd Zeen al-Morei pulls up his jeans to show off leishmaniasis marks on his leg.

"I've got 15 lesions all over my body and I'm still receiving treatment," says the 26-year-old.

Up to 40 children at the school also have the skin disease.