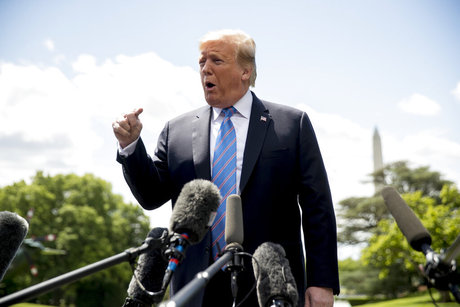 President Donald Trump on Tuesday labeled the escalating trade war with China "a little squabble" and again accused Beijing of scuttling an agreement when it was near completion.

And although he said he has an "extraordinary" relationship with Chinese leader Xi Jinping, Trump insisted he will not sign onto any deal unless it is a good one.

"We're having a little squabble with China because we've been treated very unfairly for many decades," Trump told reporters at the White House.

Last week, Trump moved to more than double the punitive duties on hundreds of billions of dollars in Chinese merchandise and the latest round of US-China trade negotiations ended without a deal.

On Monday, China hit back, announcing a sharp increase in duties on thousands of U.S. agricultural and manufactured goods in retaliation.

And the U.S. has begun the process of carrying out the Republican president's threat to hit all imports from China, extending tariffs to another $300 billion worth of Chinese merchandise.

He said the tough U.S. stance is working and Beijing wants to make a deal, but he also blamed the Chinese leadership for the setback in the negotiations.

"We had a deal that was very close and then they broke it. More than renegotiate, they really broke it. We can't have that happen."

Trump launched the trade war last year to extract profound economic reforms from Beijing and reduce the US trade deficit.

He accused China of seeking to dominate global industries through massive state subsidies and theft of American technology -- in violation of commitments it made upon joining the World Trade Organization in 2001.

The United States and China have so far exchanged tariffs on more than $360 billion in two-way trade.

Since last year, the trade war has gutted U.S. farm exports to China and weighed on the manufacturing sectors in both countries.

The administration last year offered $12 billion in compensation to American farmers and has vowed to do more, using the revenues from the new tariffs -- which he incorrectly claims is paid by China rather than US importers -- to buy crops and support prices.

"This money will come from the massive Tariffs being paid to the United States for allowing China, and others, to do business with us. The Farmers have been 'forgotten' for many years. Their time is now!" Trump tweeted.

"We're the piggy bank everybody likes to take advantage of or take from. We can't let that happen anymore," Trump then told reporters.

He has made the US trade deficit a key focus on his policies, taking the unusual view that Americans lose money by buying products from abroad.

Economists are nearly unanimous in saying trade benefits companies and consumers by providing products from countries that make them more efficiently and cheaply.

Trump said consumers can get around the tariffs by buying from other providers, or companies can move to the United States to manufacture their goods.