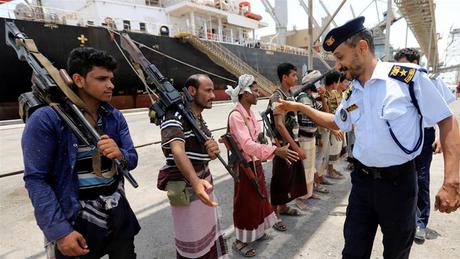 Yemen's Huthi rebels have handed over security of key Red Sea ports to the "coastguard" but much work remains to remove military equipment, the U.N. said Tuesday.

The rebel pullback is part of a hard-won truce agreement struck in Sweden in December between Yemen's Saudi-backed government and the Iran-aligned Huthis.

But the government has accused the insurgents of merely handing over the ports to their own forces in different uniforms.

The U.N. said Sunday it had been monitoring the withdrawal of the Huthi rebels from the Hodeida, Saleef and Ras Issa terminals.

A U.N. team was there on Tuesday to verify the redeployment.

Its head, General Michael Lollesgaard, welcomed the handover "of the security of the ports to the coastguard," according to a U.N. statement.

"There is still a lot of work to be done on the removal of the manifestations, but cooperation has been very good.

"U.N. teams will continue to monitor these initial steps in an impartial and transparent manner."

Huthi spokesman Mohammed Abdulsalam wrote on Twitter that the rebels "have completed their commitment in implementing the first phase of redeployment."

The city's port serves as a lifeline for millions in the impoverished Arabian Peninsula country, which has been pushed to the brink of famine by more than four years of devastating war.

Last year's deal was hailed as a breakthrough that offered the best chance so far of ending the war in Yemen, where a coalition led by Saudi Arabia and the United Arab Emirates is fighting on the government's side.

The agreement stipulates a full ceasefire, followed by a withdrawal of rival forces from the city of Hodeida and its surroundings.

But although the violence has largely stopped in Hodeida, there have been intermittent clashes and the promised redeployment of the warring parties away from the front lines has failed to materialize.

Lollesgaard said Yemen's warring parties were continuing to express their commitment to the truce deal.

"Full implementation of this agreement is critical for returning peace and stability to Yemen, and ensuring effective humanitarian access into the country where million continue to be in need of life-saving assistance," he said.

The Yemen conflict has killed tens of thousands of people since the Saudi-led military coalition intervened in support of the beleaguered government in March 2015, according to the World Health Organization.

The fighting has triggered what the United Nations describes as the world's worst humanitarian crisis, with 3.3 million people still displaced and 24.1 million -- more than two-thirds of the population -- in need of aid.

The U.N. Security Council is due to hear a briefing on Hodeida on Wednesday amid increased Gulf tensions following a Huthi-claimed drone attack on two pumping stations on a major pipeline.

The attacks were "a response to the aggressors continuing to commit genocide" against the Yemeni people", Abdulsalam tweeted.

The 1,200-kilometer (750-mile) pipeline reportedly hit on Tuesday serves as an alternative for Saudi crude exports if the strategically vital Strait of Hormuz at the mouth of the Gulf were to be closed.

Iran has repeatedly threatened to close the strait in case of a military confrontation with the United States.

The reported pipeline attacks came after the UAE said four ships, including the two Saudi oil tankers, were damaged in "sabotage attacks" off the emirate of Fujairah, close to the Hormuz, on Sunday.

Saudi Arabia said its two tankers suffered "significant damage" but there was no oil spill.