Oman Says It Is Trying to Reduce U.S.-Iran Tensions 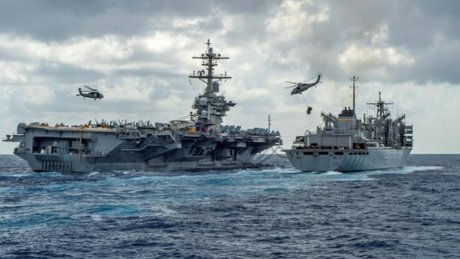 Oman said Friday it was trying to reduce spiraling tensions between the United States and Iran as the Pentagon confirmed it was considering deploying more troops to the region.

The small but strategic sultanate, which lies just across the Strait of Hormuz from Iran at the entrance to the Gulf, has maintained good relations with Tehran through successive regional crises.

Those relations have at times allowed it to play an important mediating role, including with the United States.

"We and other parties seek to calm tensions between Washington and Tehran," state minister for foreign affairs Yusuf bin Alawi bin Abdullah said in a statement.

"A war could harm the whole world, and both the American and Iranian sides are 'aware of the dangers'."

Oman played a crucial role in bringing US and Iranian negotiators together for the preliminary talks that ultimately led to a landmark 2015 nuclear deal between Iran and major powers, including the United States.

The current crisis began when President Donald Trump abandoned the deal in May last year and gradually reimposed crippling sanctions that have left Iran's economy reeling.

Washington has since further increased the pressure on Iran with the deployment of an aircraft carrier task force as well as B-52 bombers, an amphibious assault ship and a missile defence battery to the Gulf.

The movements have come in response to what the US says are intelligence warnings of a heightened threat to its interests or allies in the Middle East from Iran.

But they have raised concerns, even among US allies, that the brinksmanship with Tehran could lead to a dangerous miscalculation.

On Tuesday, Iraqi Prime Minister Adel Abdel Mahdi announced that he intended to send delegations to the US and Iran "very soon" in an attempt to ease tensions between the two countries, which are both important partners for Baghdad.