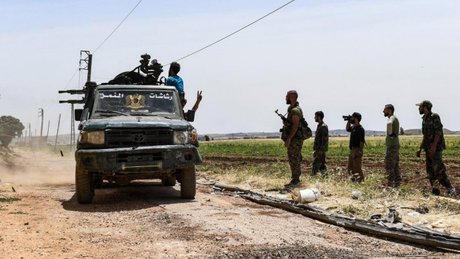 An Iraqi court on Monday condemned a fourth French citizen to death for joining the Islamic State group, despite France reiterating its opposition to capital punishment.

Mustapha Merzoughi, 37, was sentenced to death by hanging, according to an AFP journalist at the court.

In recent months Iraq has taken custody of thousands of jihadists including foreigners captured in neighbouring Syria by the U.S.-backed Syrian Democratic Forces (SDF) during the battle to destroy the IS "caliphate".

Among them are 12 French citizens, three of whom -- Kevin Gonot, Leonard Lopez and Salim Machou -- were handed death sentences Sunday by a Baghdad court in a first for French jihadists.

They have 30 days to appeal.

The trials have been criticised by rights groups, which say they often rely on evidence obtained through torture.

They have also raised the question of whether suspected IS jihadists should be tried in the region or repatriated, in the face of strong public opposition at home.

France has long insisted that its adult citizens captured in Iraq or Syria must face trial locally, refusing to repatriate them despite the risk they face capital punishment for waging their jihadist war in the region.

Paris on Monday reiterated its opposition to the death penalty, saying it would take "the necessary steps" to prevent Iraq from carrying out capital punishment against its citizens.

"France is opposed in principle to the death penalty at all times and in all places," the foreign ministry said in a statement.

"The evidence and the confession show that you joined the Islamic State group, that you worked in its military branch," the judge told Merzoughi on Monday before handing down his sentence.

Wearing a yellow prison uniform, Merzoughi said he was "not guilty of crimes and killings" but simply of travelling to Syria.

"I ask for forgiveness from the people of Iraq, Syria, France and the families of the victims," he said.

Merzoughi told investigators he had served in the French army from 2000 to 2010, including a tour in Afghanistan in 2009.

In France, he lived in the southwestern city of Toulouse, the hometown of jihadist brothers Fabien and Jean-Michel Clain who claimed the deadly 2015 attacks in Paris and were killed fighting in Syria.

Passing through Belgium and then Morocco, the French citizen with Tunisian roots underwent "religious and military training in Aleppo", in northern Syria.

He allegedly told investigators previously that he "pledged allegiance to a masked IS leader in Mosul", claiming that many senior jihadists worried about being "recognised or identified by foreign fighters they feared were spies".

But in court on Monday he said he never pledged allegiance to the jihadist group.

Leonard Lopez, one of three sentenced Sunday, is a 32-year-old Parisian convert to Islam long known to French authorities for his activity on the jihadist website Ansar al-Haqq in the 2000s.

His French lawyer, Nabil Boudi, denounced "summary justice" and said he and his Iraqi counterpart would appeal the decision.

"We condemn the capital punishment of a French national based solely on interrogations in Baghdad jails," he told AFP by telephone from Paris.

Before the most recent verdicts, three French citizens had been convicted of joining IS in Iraq: Melina Boughedir, 27, Djamila Boutoutaou, 29, and Lahcene Gueboudj, 58.

All three were sentenced to life, equivalent to 20 years in Iraq.

The Iraqi judiciary said earlier in May that it has tried and sentenced more than 500 suspected foreign members of IS since the start of 2018.

Its courts have condemned many to life in prison and others to death, although no foreign IS members have yet been executed.

Iraq has also tried thousands of its own nationals arrested on home soil for joining IS, including women, and begun trial proceedings for nearly 900 Iraqis repatriated from Syria.

The country remains in the top five "executioner" nations in the world, according to an Amnesty International report in April.