Satterfield Back in Beirut for Border Talks 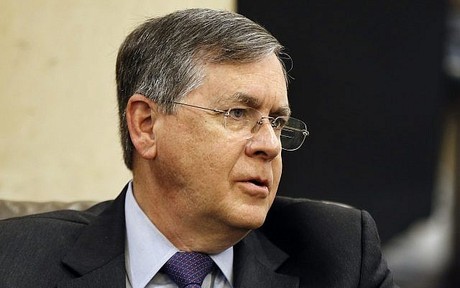 U.S. Assistant Secretary of State David Satterfield arrived in Beirut Tuesday evening reportedly carrying the Israeli response to the proposals on the demarcation of the border between Lebanon and Israel, amid information that his mission has recorded a “progress,” media reports said on Wednesday.

Al-Joumhouria daily said that Satterfield, accompanied by US Ambassador Elizabeth Richard, held a meeting directly after his arrival on Tuesday with Director of Political Affairs at the Ministry of Foreign Affairs, Ambassador Ghadi Khoury and briefed him on the latest developments regarding the border demarcation.

Said meeting was held at that level on the instructions of Foreign Minister Jebran Bassil who happens to be in London, said the daily.

Although the visit has not been set yet, the US envoy is expected to visit the Baabda Palace to meet with President Michel Aoun.

Satterfield is reportedly conveying an Israeli response to Lebanon's proposal not to set a time frame for talks between the two sides which are held under the UN flag at UNIFIL headquarters in Naqoura.

Met x and met Y and is expecting to meet Z.

The gist. Naharnet..what did they agree to?

They agreed to another meeting as usual Leb1st lol. Lunch at Beerrys place Diner at the PM's and a little drink late in the evening in jounieh where they can all relax from a hectic day of socialising.

If Israeli and Lebanese representative do not meet face to face, then he is wasting his time.