China Calls for 'Dialogue' after Gulf of Oman Tanker Attacks 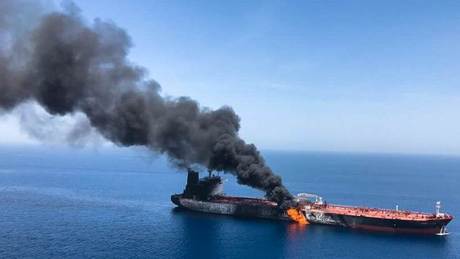 China on Friday called for dialogue after the United States accused Iran of being behind attacks on two tankers in the Gulf of Oman.

"We hope that all the relevant sides can properly resolve their differences and resolve the conflict through dialogue and consultations," said foreign ministry spokesman Geng Shuang at a regular press briefing.

The two tankers, one Norwegian- and one Japanese-owned, were set blaze in the Gulf of Oman off the coast of Iran on Thursday, escalating tensions across the region and sending world oil prices soaring.

US Secretary of State Mike Pompeo said there was strong evidence of Iran's culpability and warned Washington would defend its forces and allies in the region.

Iran's foreign ministry hit back on Friday, dismissing the accusations as "baseless".

China was one of the eight global buyers allowed to import Iranian crude oil before the US ended waivers in early May.

Chinese President Xi Jinping met his Iranian counterpart, Hassan Rouhani, in Kyrgyzstan on Friday, with Xi saying that Beijing supports maintaining the Iran nuclear deal, from which the United States has withdrawn, according to the official Xinhua news agency.

The two leaders are in Bishkek for a previously planned summit of the Shanghai Cooperation Organisation, a regional security bloc spearheaded by China and Russia.