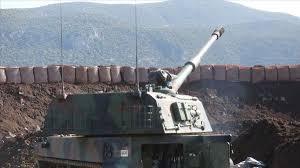 One of Turkey's observation posts was hit by shelling from an area controlled by Syrian government forces in northwestern Syria, the Turkish defense ministry said on Sunday.

There were no casualties but the ministry said equipment was damaged in the assault while Turkish forces "immediately retaliated with heavy weapons."

Shelling and mortar fire "understood to be deliberate" fired from Tall Bazan region held by Syrian regime forces hit the post in Murak region, the ministry said in a statement.

The assault comes less than four days after three Turkish soldiers were hit in another attack Turkey said was "deliberate" on another observation post on Thursday.

Two Turkish soldiers were hurt in May in a similar attack blamed on Damascus.

Turkey has 12 military observation posts in Idlib, northwestern Syria, the last bastion of jihadist forces, in a bid to prevent a large-scale offensive in the region.

Ankara fears such an assault would push hundreds of thousands of refugees into Turkey.

Turkish officials made representations to Russia about the latest attack, the ministry said. Moscow provides support to the Syrian regime of President Bashar al-Assad.

Despite being on opposing sides in the war, Moscow and Ankara, which backs rebels, have worked closely to seek a political solution and in September agreed a buffer zone deal.

The deal was meant to protect Idlib from a major regime assault but was never fully implemented, as jihadists refused to withdraw from the planned demilitarized zone.

Damascus and Moscow have upped their bombardment in the region since late April, killing over 360 civilians, according to UK-based monitor, the Syrian Observatory for Human Rights.

Russia announced a ceasefire in the province on Wednesday but Turkey said a complete ceasefire had not yet been secured.