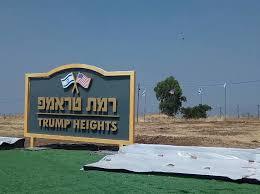 Netanyahu unveiled a "Trump Heights" sign to mark the site of the new settlement, which comes after the U.S. president in late March recognized Israeli sovereignty over the part of the strategic plateau it seized from Syria in the 1967 Six-Day war.

Israel later annexed the area in a move never recognized by the international community.

You think Moses would have enjoyed Arab regimes and mentality ?

Kan you another zionist on here?