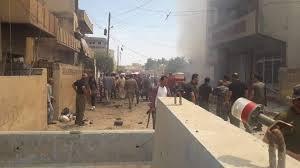 A car bombing near Kurdish security offices in northeast Syria on Monday wounded seven civilians, including a child, a war monitor said.

There was no immediate claim of responsibility for the attack near the local security forces headquarters in the Kurdish-majority city of Qamishli, the Britain-based Syrian Observatory for Human Rights said.

The suicide bomber "tried to reach the headquarters of Kurdish security forces but surrounding checkpoints and obstacles prevented him from doing so," Observatory head Rami Abdul Rahman told AFP.

"When Kurdish security forces became suspicious of the vehicle, one of its passengers ran away while a second detonated the explosive," he said.

Kurdish-held areas of northeast Syria have been hit by a spate of bombings in recent months, many claimed by the Islamic State group.

IS has vowed to carry out revenge attacks for the six-month offensive by Kurdish-led forces that culminated in March in the jihadists' ouster from their last bastion in Syria.

IS fighters retain a presence in Syria's vast Badia desert and various other hideouts, and still claim deadly attacks in territory held by the Syrian Democratic Forces.

According to the Observatory, hundreds of SDF members have been killed in attacks believed to have been carried out by IS sleeper cells since August.

Syria's war has killed a total of more than 370,000 people and displaced millions since it started in 2011 with the repression of anti-government protests.