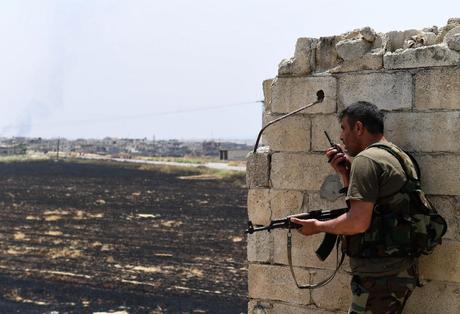 The fighting flared on the edge of Hama province when jihadist group Hayat Tahrir al-Sham launched a dawn attack on regime positions, the Syrian Observatory for Human Rights said.

Hama's northern countryside lies on the edge of a jihadist-controlled region including most of Idlib province.

The frontline had been relatively calm since clashes on Saturday killed more than 35 combatants, including jihadists and regime forces, Abdul Rahman said.

Regime airstrikes on northern Hama and neighbouring Idlib had also paused for more than 24 hours, before resuming Tuesday following the latest bout of fighting, according to the monitor.

The bombardment killed one civilian in southern Idlib, it said.

The latest battles come after rocket fire by HTS -- led by a former Al-Qaeda affiliate -- and allied rebels killed more than 12 civilians in a regime-held village in Aleppo province late Sunday.

Parts of Aleppo, Hama and Idlib are supposed to be protected from a massive regime offensive by a buffer zone deal that Russia and Turkey signed in September.

But it was never fully implemented as jihadists refused to withdraw from a planned demilitarised zone.

In January, HTS extended its administrative control over the region, which includes most of Idlib province as well as adjacent slivers of Latakia, Hama and Aleppo provinces.

The Syrian government and Russia have upped their bombardment of the region since late April, killing more than 400 civilians, according to the Observatory.