Russia's Syria Envoy in Lebanon for Talks with Top Officials 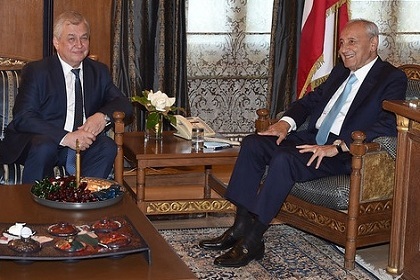 The Russian president's special envoy for Syria Alexander Lavrentiev on Tuesday met with Speaker Nabih Berri in Ain el-Tineh at the beginning of a two-day official visit to Lebanon.

The National News Agency said the envoy's talks with Berri tackled “the current developments in Lebanon and the region, especially in Syria and the issue of refugees.”

“We came today to discuss with the Speaker and with the Lebanese leaders the situation in Syria and we can resolve this crisis, as well as its repercussions on Lebanon and what Russia can do to alleviate the suffering of the Syrian people,” Lavrentiev said after the talks.

“The discussions with Speaker Berri were fruitful and we tackled the issue of the displaced Syrians in Lebanon and the need to intensify communication between Beirut and Damascus to resolve this problem as soon as possible. We will also discuss these topics with the President and the Premier,” the envoy added.

Russian Ambassador to Lebanon Alexander Zasypkin told NNA that Lavrentiev's visit is part of a tour of the region involving Iraq, Lebanon, Jordan and Syria.

“Of course he will tackle the various issues pertaining to Syrian refugees, in terms of the humanitarian, security and logistic aspects, especially that the security circumstances have improved. The envoy is also expected to address an invitation to Lebanon to attend the Astana III conference slated for July,” Zasypkin added.