Iran and the US: Escalating Tensions 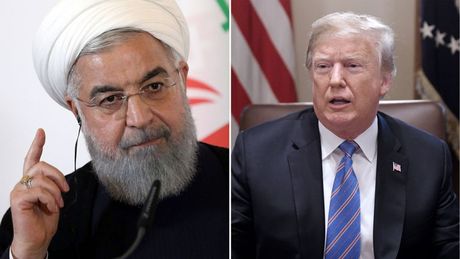 Tensions between Tehran and Washington have intensified ever since April when the US added Iran's Revolutionary Guards to its blacklist of "terrorist" organisations and strengthened sanctions against the Islamic republic.

President Donald Trump says it is the first time it has branded part of a foreign government a terrorist group.

The Guards' prized Quds Force, which operates abroad, is also placed on the blacklist.

The next day Iran says US troops serving in the wider Middle East from the Horn of Africa to Afghanistan are "terrorist" organisations.

On May 5, White House national security adviser John Bolton announces the Pentagon is sending an aircraft carrier and a bomber task force to the Middle East.

"The United States is not seeking war with the Iranian regime, but we are fully prepared to respond to any attack, whether by proxy, the Islamic Revolutionary Guard Corps, or regular Iranian forces," he says.

On May 7, the US says it is deploying B-52 bombers, a Patriot missile battery and an amphibious assault ship in the region.

On May 8, Iran says it is preparing to increase enriched uranium and heavy water production as part of its decision to stop some commitments made under the 2015 nuclear deal with major world powers.

A year after Washington unilaterally withdrew from the deal, reimposing sanctions on Tehran, Trump announces new measures against Iran's steel and mining sectors.

On May 12, four ships, including three oil tankers, are damaged in mysterious "sabotage attacks" off the United Arab Emirates.

Bolton says on May 30 that Iran is "almost certainly" behind the attacks.

The next day Secretary of State Mike Pompeo accuses Iran of trying to raise oil prices through these acts.

On June 6, the UAE says the initial findings of a multinational investigation into the attacks point to the likelihood that a state was behind them, but there is no evidence yet of Iranian involvement.

On June 16, the US military command in the Middle East (Centcom) says an Iranian missile had tried to shoot down an American drone on a surveillance mission.

Washington says a US drone was shot down on June 6 with a missile fired from Yemen "that we assess had Iranian assistance."

The next day, Iran's atomic energy organisation says Iran will surpass the uranium stockpile limit set under the 2015 nuclear deal from June 27.

- US drone shot down: Tehran -

Iran's Revolutionary Guard says on June 20 it shot down a US "spy drone" which violated Iranian airspace near the Strait of Hormuz, in "a clear message" that Tehran will defend its borders.

The Pentagon confirms the downing.