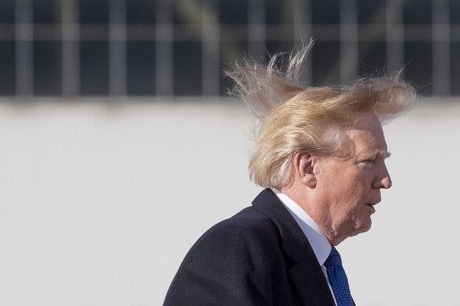 Donald Trump wants to be warlike and he wants to avoid war -- and late Thursday, with U.S. bombers poised to unleash explosive fury on Iran, those contradictory impulses came to a head.

The surprise revelation that Trump ordered the bombing of Iran in retaliation for downing a U.S. drone, only to pull back at the last minute, encapsulates the paradox at the heart of the White House foreign policy over the last two years.

"He has two instincts. One is caution, believing that endless, repeated wars have been too costly for the United States," said Rob Malley, a former advisor to Barack Obama who heads the International Crisis Group. "The other instinct is to look like someone strong, who can't be pushed around."

Many days, Trump resembles a geopolitical John Wayne, a swaggering global sheriff out to duel with rivals like China and old allies alike.

And even if the 45th president famously managed to avoid serving in his generation's big war, Vietnam, he revels in his role as commander in chief.

He rarely seems happier than when boasting about the billions of dollars spent on "rebuilding" the military or talking lovingly about the latest, deadliest weapon system.

But Thursday evening in Washington, with U.S. forces on the verge of striking three sites in Iran, that hawkish version of Trump suddenly transformed into Trump the dove.

"We were cocked & loaded to retaliate last night on 3 different sights (sic) when I asked, how many will die. 150 people, sir, was the answer from a General. 10 minutes before the strike I stopped it," Trump wrote in a tweet Friday morning.

Gung-ho bragging about "cocked & loaded" on the one hand. The peace-loving decision to avoid 150 deaths in retaliation for losing an unmanned aircraft on the other.

Even in a brief statement replete with his customary grammatical and spelling errors, Trump summarized perfectly the hesitation afflicting the world's most powerful office.

Whether this adds up to strategy or dysfunction has been an open question since Trump, who had no foreign experience beyond his business deals, became president.

In one way, Trump has been consistent.

Often going against mainstream political currents and even his own intelligence and military leaders, he has pushed for U.S. withdrawal from battlefields he says most Americans have trouble finding on the map.

But at the same time, Trump installed John Bolton, a veteran cheerleader for the Iraq invasion and a hardliner on Iran, as his national security advisor.

And even as he advocates winding down involvement in the Afghan, Iraqi and Syrian military quagmires, Trump has ramped up tension with Iran by wrecking an international agreement meant to reward the longtime U.S. foe for allowing controls over its nuclear industry.

According to Trump, the Obama-era exercise in diplomacy was pure weakness.

Malley says Trump actually does have a strategy in Iran and also in another longtime U.S. adversary, North Korea.

First he brings massive pressure, including "the threat of economic suffocation," and then he says "if you are ready to accept our conditions, the door is open to an extraordinary relationship."

The problem, Malley says, is that when the strongarm approach fails, both sides find themselves cornered.

"Then he has the dilemma he doesn't like: go to war or retreat?"

Robert Guttman, who teaches at the Johns Hopkins University Center for Advanced Governmental Studies, says the flaw in Trump's thinking is simpler -- and deeper.

"He talks big, he's a bully, but he hasn't any experience in foreign policy. He's saying: 'I'm a tough guy but don't test me.'"