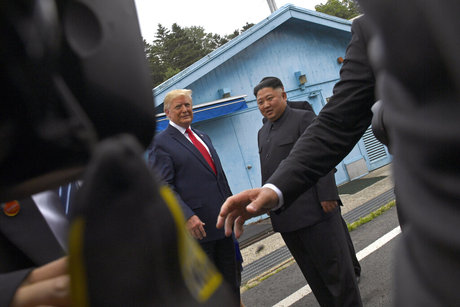 Donald Trump and Kim Jong Un's meeting in the Korean Demilitarized Zone produced a barrage of headlines and images, but left analysts questioning whether it was a small step for publicity or a giant leap for peace.

It came months after their second summit in Hanoi broke down over what the nuclear-armed North would be willing to give up in exchange for sanctions relief.

After around an hour of talks in Panmunjom -- the "truce village" in the DMZ that has divided the peninsula since the two sides and their allies fought each other to a stalemate in 1953 -- Trump emerged to say the two would begin working-level talks in the next few weeks.

He also invited the North's leader to Washington "at the right time," he added.

It was a more substantive outcome than many had expected after Trump issued his Twitter invitation to Kim and said the meeting could be as short as two minutes to simply "say hello".

But analysts questioned whether it would be enough to create sustainable progress in a process that has already been running for years and has regularly become bogged down.

Vipin Narang, a professor at the Massachusetts Institute of Technology, said the "reality show theatrics" of Panmunjom were worth it if they led to effective working-level talks.

"If not, then we will keep tuning into this same show for the next 15 months," he added.

While the Trump administration is adamant it wants to see North Korea give up its nuclear arsenal, Pyongyang has never publicly declared it is willing to do so, referring instead to the wider and more ambiguous "denuclearization of the Korean peninsula."

The North is seeking relief from wide-ranging sanctions imposed on it over its weapons programs, and has offered to close part of its Yongbyon nuclear center, but specialists say it has other facilities producing material for weapons.

But Mintaro Oba, a former State Department official in the Obama administration, called it a "temporary burst of momentum."

"We are engaged in a sort of 'defibrillator diplomacy' with North Korea: keeping the process alive through an occasional injection of energy, but never treating the underlying disease," Oba tweeted.

How much progress the talks will make is open to question, experts say.

Since the Hanoi summit collapse, Pyongyang has accused Washington of acting in "bad faith" and given it until the end of the year to change its approach, and last month fired short-range missiles for the first time since November 2017.

"That could create problems," said Go Myong-hyun, an analyst at the Asan Institute of Policy Studies.

For both participants, though, the meeting had its uses.

With a presidential election in the US next year, Trump's dramatic steps into North Korea will be a "useful tool" on the campaign trail, said Koo Kab-woo, a professor at the University of North Korean Studies in Seoul.

For its part, the North has long wanted to be treated as an equal to the US and sought to have Bill Clinton visit Pyongyang before his term expired.

"Kim didn't have to lift a finger to get Trump to cross the DMZ," she told AFP, even though there had been "no progress on denuclearization", and the North was continuing to advance its nuclear capabilities, test missiles and evade sanctions.

The short-notice meeting fits right into Pyongyang's playbook, she said, sending a message to the North that US policy was "quite porous" and suggesting that "with subsequent pushes and nudges, Kim will get his own way."