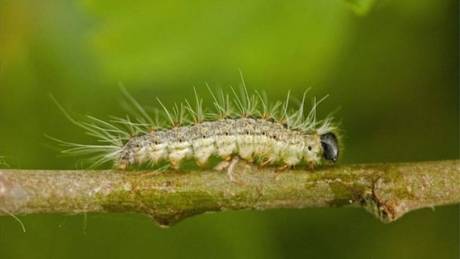 Millions of tiny caterpillars that shoot toxic hairs have triggered a health scare in the Netherlands, with hundreds of people seeking medical help for symptoms including severe skin irritation and asthma attacks.

The plague has caused at least two school closures and sporting event cancellations, prompting a meeting of Dutch agriculture officials on Wednesday to discuss how to dispose of them.

The problem has got so bad that an elderly Dutch woman in the town of Enschede attacked what she called the "rotten beasts" with a heat gun, in a video that has gone viral in the Netherlands.

"It's actually the first time that we're experiencing a plague of such proportions," Bastiaan Meerburg, director of the Dutch Pest and Wildlife Expertise Centre, told AFP.

"In some places, the caterpillars have more than tripled."

Complaints after coming into contact with the creature's venomous barbs, called setae, range from skin rashes and ugly blotches to shortness of breath and vomiting.

The infestation has become so bad that Dutch Agriculture Minister Carola Schouten ordered the creation of a government website to answer questions about the pesky crawlers.

It has more than 100 frequently asked questions ranging from what to do when pets come in contact with the hairs, to why the Dutch army is not being deployed to combat the infestation.

Two primary schools were temporarily closed near the port city of Rotterdam after pupils and teachers came into contact with the oak processionary caterpillars.

Hockey clubs in the central town of Veenendal meanwhile called off local tournaments due to nearby caterpillar nests.

The oak processionary caterpillar has always been in the Netherlands, but especially due to climate change it has proliferated and steadily made its way from the southern Limburg province to the north over the last two decades.

"The only places now not infested are the Wadden Islands, which lies off the northern Dutch coast," said Meerburg.

More oak trees have also been planted over recent years, while experts also believe a decline in the caterpillars' natural enemies like other predatory insects may have played a role.

There is however some relief on the horizon: by mid-July the caterpillars are expected to go into cocoons to become moths, meaning no more creepy crawlies capable of producing a million microscopic hairs over two months.

But the nests and the hairs -- which can last for up to seven years and withstand temperatures of up to 600 degrees Celsius -- remain and needed to be removed by being sucked up with a special industrial vacuum cleaner.

"It's a problem that's not going to go away," said Meerburg.