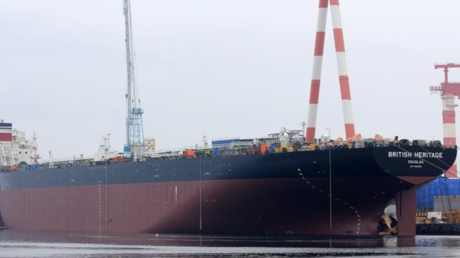 London said Thursday that armed Iranian boats tried to "impede" a UK supertanker before being warned off by a British warship in a dramatic escalation in the Gulf that jeopardizes attempts to salvage a landmark nuclear accord.

Iran's Revolutionary Guards denied involvement but also cautioned both the United States and Britain that they would "strongly regret" the UK Royal Marines' detention of one of the Islamic republic's own tankers off Gibraltar last week.

The Gibraltar police brushed aside the warning and announced the arrest on Thursday of both the Indian captain and officer of the seized Iranian tanker.

And President Donald Trump raised the U.S. pressure by tweeting on Wednesday that sanctions against Iran over its stepped-up nuclear activities would be "increased substantially" soon.

The rapid chain of events further complicates Britain and other European allies' efforts to salvage a 2015 nuclear agreement with Iran from which Washington pulled out more than a year ago.

The UK defense ministry said three Iranian boats tried to "impede the passage" a commercial vessel called British Heritage. The 274-meter (899-foot) tanker is owned by the British energy giant BP and can carry a million barrels of oil.

"We are concerned by this action and continue to urge the Iranian authorities to de-escalate the situation in the region," a Downing Street spokesman said.

The Times newspaper reported that Britain is now considering whether to send other naval resources to the Gulf.

Sky News said the transport ministry had issued new guidance to all British-flagged commercial ships in recent days to go to a heightened state of security in the area.

The UK defense ministry said that "three Iranian vessels attempted to impede the passage of a commercial vessel, British Heritage, through the Strait of Hormuz.".

Iran's Revolutionary Guards -- a vast and powerful security organisation that the United States blames for staging several tanker attacks since May -- denied trying to seize or impede the UK tanker.

"There has been no confrontation in the last 24 hours with any foreign vessels," the Revolutionary Guards said in a statement.

UK defense sources told British media that the Revolutionary Guards boats attempt to first stop and then divert the supertanker towards the Iranian shore.

The UK warship then trained its guns on the Iranian boats and delivered a "cease and desist" message by radio.

CNN reported that a U.S. surveillance aircraft captured video footage of the episode from above.

The incident adds further fuel to a volatile mix of brinkmanship and saber rattling in a region already unsettled by the Trump administration's nuclear standoff with Tehran.

Revolutionary Guards deputy commander Ali Fadavi called Britain's seizure of Iran's tanker "stupidity... a trait the American president has in spades, and the British to some extent".

"If the enemy had made the smallest assessment they wouldn't have done this act," Fadavi said.

Officials in Gibraltar -- a British overseas territory on Spain's southern tip -- said the cargo was believed to be destined for Syria.

Damascus is subject to EU sanctions while the United States has its own sets of trade restrictions on Iranian oil.

Iran has increased uranium enrichment in response to the Trump administration's decision last year to pull out of a controversial nuclear agreement world powers signed after a decade of talks with Tehran.

It surpassed one limit set in that deal a month ago and breached a second one on Monday.

Britain and other European nations have been trying to preserve the deal by setting up their own independent trade mechanism that evades U.S. sanctions on Tehran.

But Iran's decision to push ahead with higher enrichment is putting the European strategy under strain.

European parties to the agreement issued a tough joint statement on Tuesday saying Iran must return to full compliance "without delay."

Fellow deal sponsors Russia and China lay the blame for the confrontation on the United States.

Tehran is also frustrated by the perceived failure of the remaining parties to the deal to keep their promises and provide relief from the U.S. sanctions.