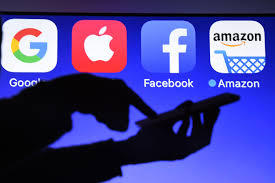 A row over taxing tech giants is set to dominate a meeting of G7 finance ministers near Paris this week, with the world's leading industrialized nations already riven by disruptive US trade policies.

During the meetings Wednesday and Thursday in Chantilly, ministers are set to discuss making taxation fairer as part of wider plans by G7 leaders to address rising inequality when they gather next month in the southern French city of Biarritz.

An international effort to update rules so as to rein in multinationals gaming the system by paying in low-tax rate countries has been plodding along.

But France and Britain gave the process a jolt last week when they moved forward with plans to apply sales taxes to digital giants, mostly American companies.

France became the first major economy to impose such a tax when legislators gave their final approval while Britain unveiled legislation.

The French measure does not specifically target US internet giants, but it is commonly called the GAFA tax, an acronym for Google, Amazon, Facebook and Apple.

French Finance Minister Bruno Le Maire will meet separately with his U.S. counterpart Steven Mnuchin, with the tax measure expected to feature prominently in their discussions.

Even before the final vote by French lawmakers, the US announced it was opening a so-called Section 301 investigation into the measure.

A Section 301 investigation was used by the Trump administration to justify tariffs on China.

Washington and Beijing have lashed out at each other with punitive tariffs on about $360 billion in goods in a trade dispute that has roiled global financial markets and undermined business confidence.

"We will urge Mnuchin to accelerate efforts to define tax rules for the 21st century rather than threaten us with Section 301, sanctions, retaliatory measures, which aren't really the best actions for allies to use on one another," a French government official told AFP on condition of anonymity.

French and British officials have indicated their preference for an overarching deal, which is being negotiated via the Organisation for Economic Co-operation and Development (OECD) and the G20, and they would abandon tech taxes if an agreement is reached.

The French government official said the US supports the tax reform effort, but played down the possibility of a breakthrough, such as an agreement on a minimum tax rate, one way to discourage so-called tax optimization by firms.

"It won't be possible to set a rate at this meeting," said the official. "It's premature. We need to get agreement on the principle first."

A number of other thorny issues await ministers, including plans by Facebook to launch a virtual currency called Libra, which has stoked concerns by regulators in numerous countries about regulation and market oversight.

"We'll reiterate our intention not to allow a private company to acquire the elements of monetary sovereignty," said the French official.

Le Maire has publicly voiced his concerns about Libra, a virtual currency to be backed with a basket of real-world currencies that Facebook says will facilitate online financial transactions.

The ministers are also expected to discuss who will take over at the International Monetary Fund after Frenchwoman Christine Lagarde was named to head the European Central Bank. The IMF post has traditionally been held by a European.