Bou Saab Ends a Two Day Visit to the UK 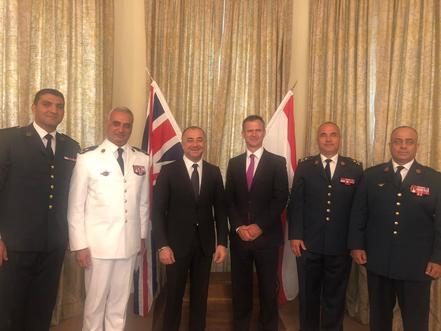 Defense Minister Elias Bou Saab ended a two-day visit to the United Kingdom. The visit reflects the value Britain places on the relationship with Lebanon and in particular our defence cooperation.

In London, Bou Saab met with Secretary of State for Defence Penny Mordaunt, Minister of State for the Armed Forces Mark Lancaster, and Chief of the Defence Staff General Sir Nick Carter

‘I am very pleased to see Minister Elias Bou Saab conclude a successful visit to the United Kingdom. We remain strong and committed partners of the Lebanese army and we look forward to strengthening our military and security relations even further.

Lebanon’s security and stability is in the UK national interest.

The UK remains a steadfast supporter to Lebanon through ongoing social, economic, educational and humanitarian projects, in addition to further support to the Lebanese Armed Forces and other security agencies. The LAF remains the sole legitimate defender of Lebanon.’