'Largest Orchid in the World' Growing in Brazil 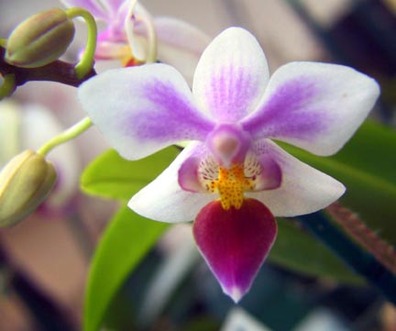 Brazil's environmental agency announced Tuesday the "largest orchid in the world" was growing in a botanic garden in the capital, at a height of 8.2 feet (2.5 meters) and some stems measuring as long as 9.8 feet (three meters).

Displayed at the Brazilian Orchids Project garden in Brasilia, the flower -- part of the Grammatophyllum genus -- has been growing for five years and already has 19 long stems, on which 400 flowers bloom, said the Brazilian Institute of Environment and Renewable Natural Resources (IBAMA).

Biologist Lou Menezes, head of the orchid garden had "grown and adapted to the harsh climate" in Brasilia, which is dryer than its native Malaysia.

Experts are working on a special hybrid species of orchid by crossing Grammatophyllum flowers with the Cyrtopodium genus, which is often found in the Brazilian rainforest.

Does your website have a contact page? I'm having
trouble locating it but, I'd like to shoot you an e-mail.
I've got some recommendations for your blog you might
be interested in hearing. Either way, great site and I
look forward to seeing it improve over time.

Excellent way of explaining, and fastidious paragraph to obtain information regarding my
presentation focus, which i am going to deliver in school.