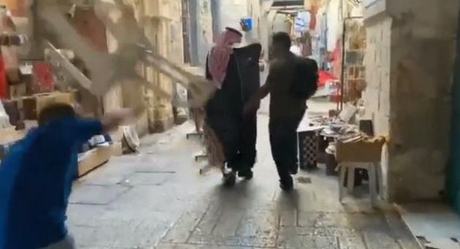 Israeli government officials on Tuesday condemned Palestinians who hurled abuse and chairs at a Saudi blogger visiting Jerusalem as a guest of Israel.

The Saudi visitor, named by Israeli public radio as Mohammed Saud, was one of six invitees from Arab states brought to Israel by its foreign ministry to give them fresh viewpoints on the situation.

Hassan Kabia, an Israeli foreign ministry spokesman, called it "barbaric" behavior. But he would not identify the visitors, describing them only as "social activists, bloggers and media people."

Such visits have been held before, but Iraq and Saudi Arabia were taking part for the first time, the foreign ministry said.

The spitting and abuse continued as he toured the al-Aqsa mosque complex.

"Go and pray with the Jews," one man shouted. "What are you doing here?"

The al-Aqsa mosque compound is the third-holiest site in Islam. Jews refer to it as the Temple Mount, revered as the location of the two biblical-era temples, and consider it their holiest place.

It is located in east Jerusalem, occupied by Israel in the 1967 Six-Day War and later annexed in a move never recognized by the international community.

Israeli Prime Minister Benjamin Netanyahu said he met with the visitors on Tuesday and "they expressed their wish that the Arab public would come to Israel and strengthen ties."

Ofir Gendelman, a spokesman for Netanyahu, described Saud as a "peace activist."

"When he came to pray at the #AlAqsaMosque, Palestinian thugs attacked him & spat on him, thus defiling this holy place," Gendelman wrote on Twitter Tuesday.

But the Islamist group Hamas, which rules the Gaza Strip, said all Arabs and Muslims should boycott the Israelis in solidarity with the Palestinians.

The visit comes as Israel seeks to improve ties with Gulf Arab countries, with which it has no formal diplomatic relations.

Those states have held off offering Israel formal recognition due to its continuing occupation of Palestinian territory, but relations have warmed of late, largely due to common concerns over Iran.

The journalists were to visit Jerusalem's Yad Vashem Holocaust memorial, parliament and holy sites, among others, the foreign ministry said in a statement.

The aim was to expose journalists "some of whom come from countries that do not have diplomatic relations with Israel -– to Israeli positions on diplomatic and geopolitical issues," it added.

Jordan, one of only two Arab countries along with Egypt that have diplomatic relations with Israel, was also participating.

They even attack their own people, yet you all want Israel to achieve peace with them. How exactly?

Phillipo the worst enemy of a Palestinian is the Palestinian. Their inability to shift their paradigms has limited their ability to deal with anything without force. The same force that has been their undoing....

They should have done what was done in Apartheid South Africa...NECKLACE them. This is how Mandela's ANC handled collaborators with Apartheid and how he became famous. He refused to leave prison unless the fall of the apartheid regime. Israel is not only an apartheid state, but an ethnic cleansing state.

What a joke. A Lebanese (presuming you are) talking about an Apartheid State. Where else in the world do the President, Prime Minister and Speaker of Parliament have to belong to specific racial groups. Where else in the world is the Parliament split along racial and not political lines. The country is so scared to discover the truth regarding the racial make up of the population that there hasn't been a census for...........just how many years.
Then you have the audacity to call a country that has an Arab Judge on its Supreme Court as well as tens on its lower courts, Senior Arab officers and hundreds of lower ones in its army and police force, thousands of Lawyers, Doctors, University Lecturers, almost half of its national football team, etc as an Apartheid State.

Little John I hope you enjoy the same justice you would like to see on others. Only a hypocrite with dictatorial thinking would have such an ignoramus thinking. Also Mandela did not become famous for killing his enemies ya tashit but rather for his long patience for justice! No wonder Israel has it made easy with dweebs like you.....

You nothing about Mandela. But, yes long patience: Never recognize apartheid. Necklace collaborators like you.

Zionists are those who support a racist Jewish ethnic cleansing state and collaborators are persons like you who condone zionists.

Little John your kizb party has not fired a bullet towards Israel in over 14 years. According to your logic they are therefore supporters of Zionism...but you knew that anyway....