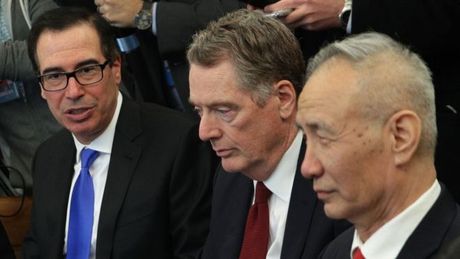 U.S. and Chinese officials will resume negotiations next week in an effort to resolve the year-long trade dispute between the world's top two economies, US Treasury Secretary Steven Mnuchin said Wednesday.

The meetings in Shanghai on Tuesday and Wednesday will be the first face-to-face discussions since negotiations collapsed in May after President Donald Trump accused Beijing of reneging on its commitments.

Mnuchin and US Trade Representative Robert Lighthizer will lead the US delegation.

The White House said in a statement the talks with Vice Premier Liu He will "cover a range of issues, including intellectual property, forced technology transfer, non-tariff barriers, agriculture, services, the trade deficit and enforcement."

Senior officials have spoken by phone twice in the last two weeks in the bid to jump start the negotiations.

Mnuchin said on CNBC he hopes to make progress but added there are "a lot of issues" pending so he expects another round of talks would follow in Washington.

At a meeting in Japan last month, U.S. President Donald Trump and his Chinese counterpart Xi Jinping agreed to cease further hostilities in the year-long trade war while the two sides worked to revive negotiations.

The countries have imposed tariffs on $360 billion in two-way trade and Trump has threatened even more punishing duties on Chinese goods.

That truce halted Trump's plan to hit China with another round of punishing tariffs on $300 billion in goods. The International Monetary Fund warned that that step added to existing tariffs would cut global economic growth by 0.5 percent.

Washington is demanding Beijing end its alleged theft of American technology and open its economy further to imported goods and foreign investment.

Stock markets were cheered when word of possible talks emerged Tuesday but the good news was overshadowed Wednesday by disappointing earnings results from Boeing and Caterpillar -- which specifically cited weakening demand in China.

Christopher Balding, a former associate professor of business and economics at the HSBC Business School in Shenzhen, told AFP observers should "temper expectations" for the talks since the fundamental issues "will not be easily resolved."

"I would guess this is more of a meeting to restart the process than any real hope of an agreement," he said.

And he raised the possibility Beijing will drag out the talks through U.S. presidential elections in 2020 because they have "has decided to wait out the coming election and hope for a more favorable partner."

The Trump administration has put Huawei on its so-called Entity List, which means US companies need a license to supply it with US technology.

Huawei -- a leader in next-generation 5G wireless technology -- remains barred from developing 5G networks in the United States, and the Trump administration is trying to convince its allies to do the same.

Mnuchin implied that the Huawei case is on a separate track from the trade talks.

The Commerce Department is looking at applications for waivers from the sanctions.

He also downplayed concerns about links between Google and Beijing.

"We're not aware of Google working with the Chinese government in a way that raises concerns," Mnuchin said.

"They assured us that there is very, very limited work. The only work they're doing is some minimal open source work."

Trump last week said he wants his administration to "take a look" into whether Google has been working with the Chinese government -- an allegation swiftly denied by the U.S. internet giant.