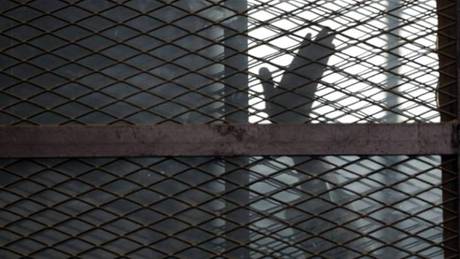 About 130 inmates have been on hunger strike in an Egyptian prison for more than six weeks in protest at inhumane conditions and denial of family visits, Amnesty International said Wednesday.

Many of those on strike in southern Cairo's Al-Aqrab (scorpion) maximum security prison were arrested "more than two years ago and have not been allowed a single visit from their families or lawyers," the rights group said.

Since the action was launched on June 17 authorities have retaliated against detainees by "beating them, applying electric shocks with tasers", Amnesty said citing a statement issued by prisoners.

"The Egyptian authorities have pushed scores of detainees at Al-Aqrab to breaking point," it said.

"The combination of squalid and inhumane detention conditions and the denial of family visits and access to their lawyers... has created an unbearable situation for detainees," said Magdalena Mughrabi, Amnesty's deputy Middle East and North Africa head.

"By refusing to allow detainees to see their families, Egyptian authorities are flagrantly flouting both Egyptian and international law and displaying callous cruelty," she said.

Two family members interviewed by Amnesty said that even when they had authorisation from the Supreme State Security Prosecution to visit detained relatives, prison authorities refused to allow the visit to go ahead.

Since Morsi's overthrow, Sisi has waged an ongoing crackdown, targeting his supporters from the Muslim Brotherhood with thousands jailed and hundreds facing death sentences.