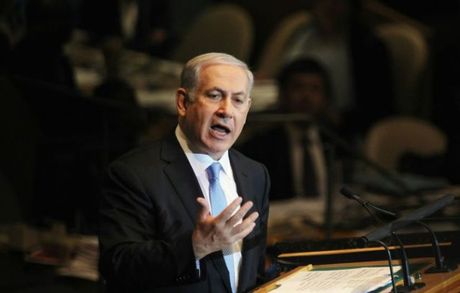 Israeli Prime Minister Benjamin Netanyahu faced harsh criticism and mockery Monday by election rivals and a former cabinet colleague after members of his Likud party were asked to pledge support for his leadership.

The request for Likud politicians to pledge to support Netanyahu as prime minister after September 17 elections came with rivals in the opposition calling on members of his party to ditch him.

His opponents went as far as to accuse Netanyahu of engaging in "North Korea"-like tactics due to what some were labelling a loyalty pledge.

The veteran premier is engaged in a tough re-election campaign while facing the possibility of being indicted for corruption in the months ahead.

He failed to form a governing coalition after April polls despite his Likud along with its right-wing and religious allies winning a majority of seats.

The main opposition Blue and White alliance has called on Likud to abandon Netanyahu and form a unity government with them.

At the weekend, former defence minister Avigdor Lieberman, of the hardline Yisrael Beitenu party, warned that the next vote has to produce a government, and if Netanyahu cannot do the job another Likud MP should step forward.

With Likud accusing Lieberman of trying to encourage rebels, Netanyahu loyalist David Bitan on Sunday enlisted the top 40 party candidates to sign up to a document saying that they would support only Netanyahu in a the next coalition-building attempt.

"Prime minister and Likud chairman Benjamin Netanyahu is the only Likud candidate for prime minister -- and there will be no other candidate," said the pledge distributed by Likud.

Moshe Yaalon of the centrist Blue and White was among opponents likening the Netanyahu government to that of Kim Jong Un.

"It reminds me of the North Korean requirement for every citizen and tourist to make deep bows before every statue of the leader," he wrote on Twitter.

Netanyahu snapped back on social media that Likud chose its leader and electoral candidates in democratically run primaries.

"Are there primaries in North Korea? There are none," he wrote, pointing out that Yaalon's Blue and White did not hold primaries.

Netanyahu biographer and fierce critic Ben Caspit wrote Monday in Maariv newspaper that "Bibi", as he is widely known, is smart enough to know that Likud members' pledges will have no value if it becomes clear he is a lame duck.

"Once he fails to put them in power, they will recalculate their course," he wrote.

Another blow was delivered by former Likud cabinet minister Limor Livnat, once one of Netanyahu's most stalwart supporters, in a commentary in Yedioth Aharonot newspaper addressed to Likud members.

"It’s good that you signed," she wrote. "Actually, you had no choice."

"What will happen afterwards? Well, that is a different story."