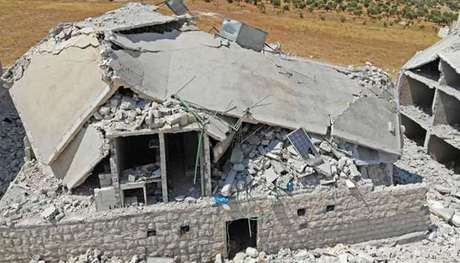 A Friday truce was supposed to protect three million people living in the Idlib region after three months of deadly bombardment.

But jihadists running the region on Saturday refused to comply with a key condition to that truce, declaring they would never withdraw from a planned buffer zone around the area.

On Monday, Damascus declared the truce over, accusing its opponents of attacking civilian areas and bombarding an air base of its ally Russia.

In two government-held villages in Hama province, rocket fire by jihadist groups and allied rebels took the lives of three civilians including a child, the Britain-based monitor said.

Observatory chief Rami Abdel Rahman said however that air strikes were not as intense as the previous day.

After the truce was scrapped on Monday, regime barrel bombs killed four civilians in the town of Morek in the northern Hama region, the Observatory said.

During the truce, air raids had stopped but land-to-land fire continued, killing one civilian on each side, according to the monitor.

Hayat Tahrir al-Sham, a jihadist group led by Syria's former al-Qaida affiliate, has since January controlled most of Idlib province as well as adjacent parts of the Hama, Aleppo and Latakia governorates.

Other rebels and jihadists are also present.

A Turkish-Russian deal struck in September last year was supposed to avert a massive government offensive on Idlib.

But that deal was never fully implemented as jihadists refused to withdraw from the planned demilitarized cordon.

Instead, heightened attacks by the regime and Russia have killed 800 civilians and pushed 400,000 people from their homes since the end of April, according to the U.N.

Syria's conflict has killed more than 370,000 people and driven millions from their homes since it started with the brutal repression of anti-government protests in 2011.