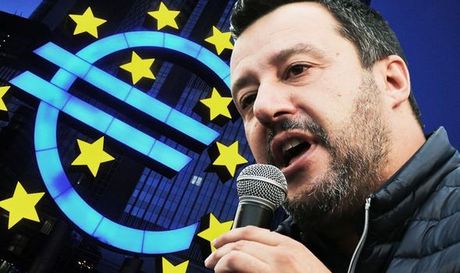 European stock markets slumped Friday and the pound hit a fresh two-year low versus the euro as traders reacted to a fast-moving Italian political crisis and official data showing the UK's Brexit-facing economy is on the brink of recession.

"US equity markets are poised to open a little lower on Friday, tracking losses across Europe," he added.

"Naturally, Italian stocks -- and in particular, banks -- and bonds have been hardest hit but they are dragging everyone else down with them," Erlam added.

In currency trading, sterling's woes meant losses were limited for the European single currency, which managed a two-year high at 92.70 pence.

Adding to Britain's economic troubles, official data released Friday showed that the country's economy unexpectedly shrank in the second quarter of the year.

Another contraction in the third quarter would put Britain in an official recession, ahead of the nation's expected withdrawal from the EU on October 31.

"All in all, today's disappointing GDP figure is set to raise alarm bells over Brexit dragging the UK economy deeper into the abyss," said Lukman Otunuga, senior research analyst at FXTM.

"This unfavorable scenario may prompt the Bank of England to cut interest rates sooner than anticipated, in an effort to revive the UK economy."

Tokyo managed to hold on to its winnings after figures showed that Japan, the world's third-biggest economy, was growing faster than predicted.

In a volatile week for markets, equities were hammered Monday after Beijing allowed the yuan to slide sharply against the dollar following President Donald Trump's announcement of fresh tariffs on Chinese goods starting September 1.