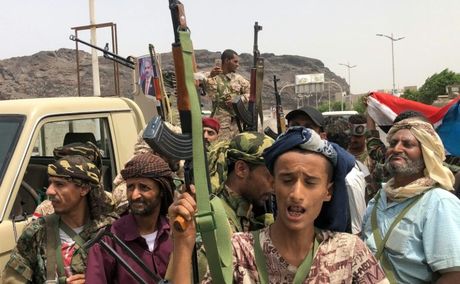 South Yemen, where separatists have captured Aden's presidential palace after deadly clashes with pro-government forces, was an independent state before its merger with the North in 1990.

Here is some background.

South Yemen became an independent country in 1967 after a bitter, four-year liberation war with its British colonisers.

Britain had occupied the area around the key port of Aden since 1839, using it to protect and refuel ships heading to and from India.

The new People's Democratic Republic of Yemen was socialist and under the influence of the Soviet Union.

North Yemen had been an independent state -- first a kingdom, then a republic -- since the collapse of the Ottoman Empire in 1918.

Relations between the Saudi-backed North and the South were often tense, sparking wars first in 1972 then in 1979.

They moved towards unity in the 1980s, officially merging on May 22, 1990 to form the Republic of Yemen with the city of Sanaa, north of Aden, as the capital.

The separatist movement in the south sparked several weeks of civil war in 1994 but it was crushed by northern Yemeni forces.

The former South Yemen accounts for two-thirds of the unified country, covering the eastern regions and sharing a border with Oman. Saudi Arabia is to the north.

Despite its size, it is home to only a fifth of Yemen's total population of around 28 million.

Its main sources of revenue are agriculture and fisheries.

Aden was capital of the independent South and has been Yemen's temporary capital since Huthi rebels forced President Abedrabbo Mansour Hadi to flee Sanaa in 2015.

Located on the Gulf of Aden some 380 kilometres (235 miles) south of Sanaa, is the second largest city in Yemen.

With a history dating back to antiquity, it was a prosperous trading post under British rule.

When Marxists took power after the departure of the British in 1967, the city maintained its liberal traditions, unlike the more austere north.

The Huthis launched their rebellion in 2014, seizing the presidential palace just months later and forcing President Abedrabbo Mansour Hadi to relocate his government in Aden.

Since reunification, residents of the south have complained of discrimination by northern-dominated authorities.

In 2007-2008 thousands of people demonstrated in southern towns, giving birth to the Southern Movement which calls for autonomy or secession.

In 2017, tensions rose again between separatists and the government after Aden governor Aidarous al-Zoubeidi was sacked by the president.

In late January 2018, separatist forces seized almost all of Aden in three days of clashes in which 38 people were killed.

The separatists are backed by Abu Dhabi -- despite the United Arab Emirates being a key part of a Saudi-led coalition backing the government against the Huthis.

Al-Qaeda in the Arabian Peninsula (AQAP) has exploited years of chaos to establish itself in southern Yemen.

Its first known attack in 1992 targeted a hotel in Aden used by American soldiers heading to Somalia.

In 2000, 17 American soldiers were killed in a suicide attack on the destroyer USS Cole in Aden's port.

The Islamic State group has also extended its operations in the south, attacking symbols of the state, including in Aden.