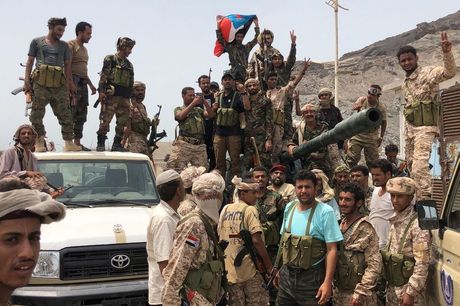 The flare-up, in Abyan province, comes after the separatist Southern Transitional Council (STC) partially withdrew from key sites it occupied in Aden, and the Saudi-led military coalition -- which backs the government -- said Riyadh and Abu Dhabi had "succeeded in calming the situation".

But on Tuesday fighters from the so-called Security Belt Forces surrounded a military camp in Zinjibar, the capital of Abyan, and another at Al-Kawd, according to government sources.

Yemeni Information Minister Moammer al-Eryani said the Zinjibar base had been surrounded, noting that it was a special forces camp.

"The Security Belt Forces... are demanding the (government) troops surrender or they will storm the camp," he said, referring to a United Arab Emirates trained force that is aligned with the separatist STC.

The Security Belt Forces are "pursuing (agents) working to destabilise security and stability and hiding in the camps belonging to the legitimate government", he told AFP.

The spike in tensions between the separatists and pro-government forces constrains their cooperation against a common foe -- the Iran-aligned Huthi rebels -- in a years-long war that has pushed the country to the brink of famine.

On August 10, the Security Belt Forces ousted loyalists of President Abedrabbo Mansour Hadi from what was the capital of the formerly independent south in clashes that left around 40 people dead.

They agreed to a withdrawal under pressure by Saudi Arabia and the UAE -- both key to the military coalition supporting the Yemeni government against the Huthis -- but retain control of key military sites.

"What Abyan governorate is witnessing is an unjustified escalation by the STC," he tweeted on Tuesday. "It is something that is rejected and unacceptable and will undermine mediation efforts by Saudi Arabia."

South Yemen was a separate state until it merged with the north in 1990.

Four years later, an armed secession bid ended in occupation by northern forces, giving rise to resentments which persist to this day.

The Saudi-led military coalition sent a delegation to Aden on Thursday to discuss the new front in the crisis.

The UAE is Saudi Arabia's main partner in the coalition fighting the rebels, but trained and equipped the separatists.

Analysts say the break between Hadi's internationally recognised government and the separatists reflects a wider rift between Riyadh and Abu Dhabi.