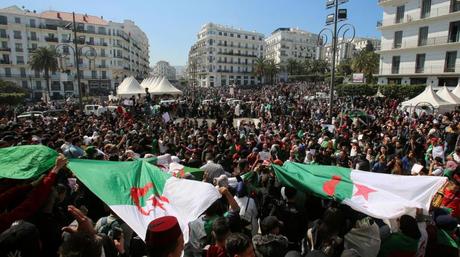 Algerians launched an unprecedented protest movement in February, filling the streets of cities across the country and forcing the president out of office.

Six months later, the movement is still going strong in the face of unyielding powers.

The progress already made is "irreversible", said Said Salhi, vice president of the Algerian League for the Defence of Human Rights and a prominent figure in the protest movement.

"The Algerian people cannot go back," he said.

The Algerian protesters have "already accomplished more than many observers expected", according to the Institute for Security Studies (ISS) think tank.

The greatest feat was the resignation on April 2 of president Abdelaziz Bouteflika, in power for 20 years, whose bid for a fifth term had sparked the protests.

In addition, several "widely disliked" regime officials and businessmen, long suspected of corruption though considered untouchable, are now behind bars.

Since Bouteflika stepped down, the movement has pushed for a complete overhaul of the political system.

The high command of the army, weakened under the former leader, has meanwhile gained prominence.

The country's leadership is now being challenged by a society that has realised its collective strength, experts say, and rediscovered the freedom of expression it was long deprived of.

"Freedom of speech, even within state institutions" is one of the "undeniable benefits", Algerian academic Mohamed Hennad said.

Louisa Dris-Ait Hamadouche, professor of political science at the University of Algiers, pointed to "the realisation of what is now politically unacceptable" among Algerians.

She also noted "the rise in aspirations to a new level... (and) the awareness of the power of mobilisation."

The movement has led to an end of the "usual divisions" between generations or men and women, she added.

- What do Algerians want? -

For weeks now the situation in the country has appeared to be in deadlock.

"Government efforts to placate the public through small, largely symbolic actions...  have only fuelled demand for more comprehensive change," the ISS said.

For powerful army chief Ahmed Gaid Salah, the "fundamental demands" of the movement have been "entirely" satisfied.

On August 2 he "categorically" rejected pre-conditions to launching talks with protesters, who have continued to call for his resignation and that of other Bouteflika-era insiders.

Authorities have rebuffed the call for total reform of the state, arguing presidential polls are the only way forward.

Elections planned for July 4 were postponed, after the only two candidates -- both little-known -- were rejected.

Demonstrators remain opposed to polls organised before broader political changes, and have so far maintained a united front.

Algerians would "reject an election that leads to the reproduction of the system", Dris-Ait Hamadouche said.

In an effort to garner support for an election, an ad hoc advisory body was established to set the conditions.

But it has struggled to establish legitimacy and is the subject of vitriol at weekly Friday protests.

The ISS and other experts say what will happen next is unclear.

The "uncertainty is exacerbated by a worsening stand-off between the protest movement and the government", the ISS said.

For Hennad, "the outcome (of the crisis) will depend on several factors and unforseen events that we have no control over".

But for now, he said the movement shows no sign of losing steam.

In the face of leaders' "stubbornness", he would not rule out protesters using other methods such as acts of civil disobedience or strikes.

"Civil disobedience is coming!" demonstrators shouted at rallies earlier this month in Algiers.

A large security presence has accompanied protests, but few anticipate the brutal intervention by the army seen in previous decades.

Salhi said the protest movement was determined to keep up the pressure as it seeks a "negotiated solution".

"We do not want chaos and the collapse of the state. We want a transition. We want a break with the old system," he said.