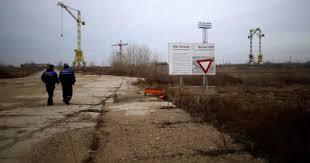 Bulgaria currently operates one Soviet-built 2,000-megawatt nuclear power plant at Kozloduy on the Danube river, which supplies one-third of the country's electricity.

Plans to build a second plant at Belene, also on the Danube, have met with opposition with experts saying it would not be economically viable as neither Bulgaria nor its neighbors are expected to need new energy sources before 2035.

Petkova insisted Belene was "a serious project which requires serious funding," adding the energy ministry already received four bids from potential buyers of the electricity from the new plant.

Besides Rosatom and CNNC, other bidders to build the plant are South Korea's KHNP and four smaller companies and consortiums from Bulgaria, the Czech Republic and Germany, Petkova said.

The energy ministry will now have three months to shortlist approved candidates who will be invited to submit binding offers, she added.

In 2012, Sofia scrapped a previous deal with Russia's nuclear company Atomstroyexport -- which is part of Rosatom -- to build the plant, after failing to find a foreign investor to share with the government the project's spiraling costs, estimated at the time at about 10 billion euros ($11.8 billion).

The scrapping angered Moscow, and the Bulgarian government had to pay Atomstroyexport some 601 million euros in compensation after the firm took it to international arbitration.

In the meantime, Bulgaria -- under U.S. and EU pressure to limit its energy dependence on Russia -- received all the necessary, already paid-for equipment for the twin-reactor plant.

Attempts to sell off the equipment failed, prompting the parliament vote to revive the project.

This time, the government will not offer any state or corporate credit guarantees or preferential electricity buy-out prices to the participants.