Salvini: Italian Far-Right Leader Down but Not Yet Out 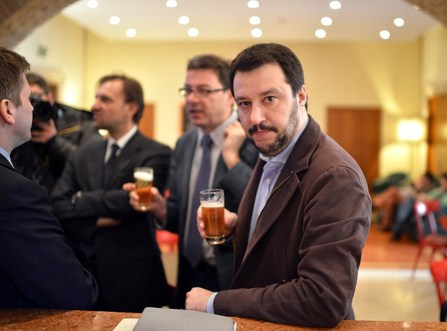 With his "Italians first" rallying cry and his tub-thumping against Islam and illegal migrants, Matteo Salvini's stint as Italy's deputy prime minister and interior minister made him the country's most popular and controversial politician.

But the leader of the far-right League party was on Tuesday ushered away from the government bench and joined the opposition after his miscalculated power grab that saw Prime Minister Giuseppe Conte tender his government's resignation.

Nevertheless, Salvini's long political career is not over after 14 months of proudly promoting his nationalist, anti-immigrant mantra in the press while dismissing criticism that he uses racist, xenophobic and tasteless language.

"Thank you, finally, I would do it all again," Salvini said after he was effectively kicked out of government.

His blunt attacks on migrants, as well as Islam, gay marriage and criminals, have replaced the historic secessionist battle cries of the League and seen his party soaring in opinion polls.

But after a stormy 14 months of rows with coalition partner the Five Star Movement, Salvini, 46, pulled his support in the hope of snap elections that would make him premier.

The deputy premier was hoping to capitalize on the League's top billing in May's European elections, with opinion polls suggesting the League could double its 2018 election result if a vote were held tomorrow.

Born in Milan in 1973, Salvini joined what was then the Northern League in 1990, aged just 17, rising quickly through the ranks.

At the time, the Northern League was known for its campaign to secede from Italy, with Salvini making his name while running its Radio Padania -- the wealthier northern region it wanted to see independent.

One of his shows was called "Never Say Italy" and in 2011, he won notoriety for boycotting Italy's 150-year anniversary celebrations, putting his desk outside Milan city hall to show he was working.

"The tricolore doesn't represent me," Salvini said of the Italian flag in 2014.

But by 2018, he was campaigning as far south as Matera in the impoverished Basilicata region, where he promised "order, rules, cleanliness" and railed against "out of control" immigration.

He has successfully shifted his party's image from defender of the wealthy north against its "parasite" south, to that of guardian of Italy's national sovereignty.

Facing a migrant crisis with hundreds of thousands landing on Italian shores, Salvini furthered his agenda by appealing to a sense of resentment among many Italians who feel Europe has abandoned them.

A staunch critic of the EU, he opposes same-sex unions, wants to deport foreign criminals and to bulldoze Roma camps.

His blunt language has reminded some Italians of the Mussolini era in the 1920s and 30s, when minority groups were persecuted.

Upon taking up the interior ministry post, Salvini insisted rescued migrants could only land in Italy if other EU countries took them in.

A savvy social media user, he has successfully pushed his agenda online, updating his followers daily with live videos, photos and even pictures of what he eats.

A known admirer of Russian President Vladimir Putin, Salvini has been pictured in pro-Putin T-shirts on visits to Moscow.

But his relationship with Russia is facing scrutiny after claims last month about an alleged bid by the League to broker $65 million (58 million euros) in covert Russian funding.

Salvini has denied receiving any money but continues to face questions over possible collusion.

Although happy to talk about his two children -- 14-year-old Federico and Mirta, five -- Salvini is less happy to discuss his complicated love life.

His then girlfriend, model and TV presenter Elisa Isoardi, broke up with him in an announcement on Instagram last November, with Salvini also posting a response while saying "I never made public my private life".

His children come from previous relationships, one with ex-wife Fabrizia Ieluzzi, a political journalist, and the other with former girlfriend Giulia Martinelli.