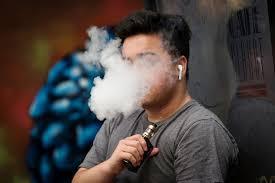 The U.S. state of Michigan has announced a ban on flavored nicotine vaping products, amid growing concern among health authorities over the impact of a product long promoted as less harmful than smoking.

"And right now, companies selling vaping products are using candy flavors to hook children on nicotine and misleading claims to promote the belief that these products are safe," said Governor Gretchen Whitmer. "That ends today."

The emergency rules -- the first of their kind in the U.S. -- will go into effect once the text is finalized, for a renewable six month period.

Sales of e-cigarette refills and flavored liquid nicotine will be prohibited in retail stores and online in Michigan, which will also forbid all marketing that presents vaping as "clean," "safe" or "healthy."

The success of e-cigarettes -- and particularly the Juul brand -- has produced a delayed but increasingly intense reaction from federal and local health authorities.

The U.S. administration has launched an investigation of Juul, which is based in San Francisco, and last year announced a ban on internet sales of cartridges containing flavors like bubble gum that appeal to young people.

Under pressure, Juul has taken steps to block the sale of its products to minors online and with its distributors.

Several states have set 21 as the minimum age for buying e-cigarettes while San Francisco has banned their sale entirely.

Adding to concerns is a mysterious spike in serious lung conditions that have so far affected 215 vapers and resulted in one death, according to the Centers for Disease Control.

Investigators have not identified the specific brand or product causing the illnesses, which is accompanied by coughing, shortness of breath, chest pain, and in some cases vomiting and diarrhea.

But in numerous cases, cannabis has been used by those afflicted. As a precaution, U.S. health authorities last week appealed to Americans not to use cannabis cartridges, a practice that is widespread among vapers.