Rwanda Agrees to Take in African Migrants Stuck in Libya 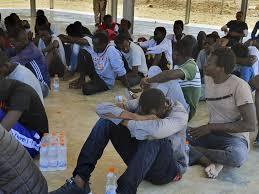 Rwanda agreed Tuesday to take in hundreds and potentially thousands of African migrants stranded in Libya, a deal the African Union hopes to replicate with other member states.

"We will be receiving the initial number of 500 in a few weeks," Hope Tumukunde Gasatura, Rwanda's ambassador to the AU, told a news conference after signing a memorandum of understanding alongside representatives of the AU and the U.N. refugee agency UNHCR.

The first group "is principally made up of people originating from the Horn of Africa," the AU and the U.N. said in a statement.

They will be housed in a transit center in Rwanda before being resettled elsewhere unless they agree to return to their home countries.

In the chaos that followed the fall and killing of former dictator Moammar Gadhafi in a 2011 uprising, Libya became a key transit point for sub-Saharan African migrants seeking to embark on dangerous journeys to Europe.

The UN says some 42,000 migrants are currently in Libya.

"We have been desperately searching for solutions for those people," said Cosmas Chanda, UNHCR's representative to the AU.

The Rwandan government is prepared to take in as many as 30,000 Africans from Libya, though the plan is for the process to unfold in batches of 500 to prevent the country from becoming overwhelmed.