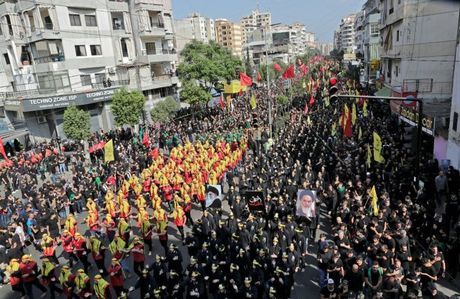 Anti-Israeli chants rang through the streets of a Hizbullah bastion in the Lebanese capital's southern suburbs on Tuesday as thousands of black-clad Shiites commemorated the seventh-century killing of Prophet Mohammed's grandson.

"We have taught Israel that our people are not weak," the men cried, beating their chests in unison, during an Ashoura commemoration marking the killing of Imam Hussein in battle by Caliph Yazid's forces.

This year's ceremony comes shortly after a series of confrontations between Hizbullah and Israel, including an exchange of cross-border fire at the start of the month.

Standing behind the crowd, a black banner tied around his head, Mohammad Ali praised the September 1 Hizbullah missile attack on Israel that triggered the border flare-up.

"For years, our families and our children have slept in bunkers because of the Israelis," said the 49-year-old.

"Now it is their turn to sleep in bunkers," he told AFP. "The era of defeat is over."

From sunrise, thousands of men gathered in Beirut's southern suburbs, a Hizbullah bastion and target of an August 25 drone attack that the movement blamed on Israel.

Some were crouched on the floor crying, tears streaming down their faces, as they listened to a recital of Hussein's death.

Others sat in prayer as the recital blasted from speakers, interrupted only by the sporadic weeping of the narrator.

Some carried black flags at the ceremony which came one day after Hizbullah said it had downed and seized an Israeli drone as it flew across the Lebanese border.

In the procession, thousands marched towards a main square, watched by Hizbullah forces deployed on rooftops and on sides of the road.

In a televised speech broadcast live, Hizbullah chief Sayyed Hassan Nasrallah said his movement would respond to any Israeli attack on Lebanon.

"In the event of an attack on Lebanon, in any form whatsoever, there will be an adequate response to the aggression," Nasrallah warned.

The cross-border fire on September 1 came a week after an Israeli strike killed two Hizbullah operatives in Syria as well as the drone attack in Beirut's southern suburbs.

Standing behind a metal barricade on a sidewalk, Fawzi Fawaz said Tuesday's huge turnout sent a message to Israel.

"These masses show Israel... the great power of the resistance," the 66-year old from south Lebanon said, Hizbullah's yellow banner wrapped around his neck.

Nearby, dozens of black-clad young men were hunched on the floor, pictures of Hizbullah "martyrs" tied to their foreheads in yellow fabric.

Another participant, Lokman Hakim, said the Shiite movement's battle against Israel drew inspiration from the original battle of Hussein.

"Imam Hussein some 1500 years ago... rose up against injustice and persecution," the 22-year-old student said, with a picture of a Hizbullah fighter killed in Syria in 2013 on his forehead.

According to Shiite belief, Hussein went knowingly to his death at the hands of Yazid's forces in what is now Iraq.

The ideal of self-sacrifice is a key tenet of Shiite Islam to this day.

Carrying yellow Hizbullah flags, fathers of the movement's fallen stood in line, some carrying portraits of their children who died fighting with Hizbullah in either Syria or south Lebanon.

Yassin Hamad, a frail and elderly man, said he has lost two his sons -- one in a 2005 Hizbullah operation against Israel in southern Lebanon and the second in Syria in 2014.

"I still have five sons and they are all on the same path" of resistance, he told AFP.