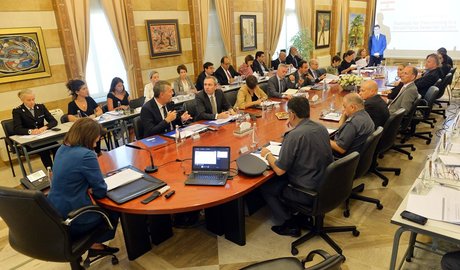 Minister of Interior and Municipalities Raya el-Hasan held a meeting with ambassadors of the donor states and the representatives of international organizations who tackled the file of conditions in Lebanese prisons, the National News Agency reported on Wednesday.

Representatives of international organizations such as the UNDP, WHO and UNICEF also attended.

Hasan said the meeting aimed at explaining the situation in Lebanese prisons.

"I have placed the issue of prisons among my top priorities ever since I assumed my post as Interior Minister. I am aware that this file is thorny and is being politicized," she said.

"I want to set a roadmap to improve the condition in prisons in order to fulfill the minimum standards of human rights and to present a better image to the international community about the jails in Lebanon," she added.

Accordingly, Hasan highlighted the importance of coordination between ministries and the representatives of the international organizations and donor states.