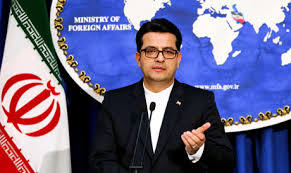 Iran on Sunday dismissed as "meaningless" U.S. accusations it was behind drone attacks on Saudi oil installations, suggesting Washington was seeking a pretext to retaliate against the Islamic republic.

"Such fruitless and blind accusations and remarks are incomprehensible and meaningless," foreign ministry spokesman Abbas Mousavi was quoted as saying in a statement.

US Secretary of State Mike Pompeo condemned Iran after Saturday's attacks, which knocked out half of the kingdom's oil production.

Yemen's Iran-aligned Shiite Huthi rebels claimed responsibility, but Pompeo said "there is no evidence the attacks came from Yemen".

Mousavi said the allegations over the pre-dawn strikes on the Abqaiq and Khurais in Eastern Province were meant to justify actions against Iran.

"Such remarks... are more like plotting by intelligence and secret organizations to damage the reputation of a country and create a framework for future actions," he said.

Arch-foes Tehran and Washington have been at loggerheads since May last year, when President Donald Trump pulled the U.S. out of a 2015 deal that promised Iran relief from sanctions in return for curbs on its nuclear program.

Since the withdrawal, the United States has slapped crippling sanctions on Iran as part of a campaign of "maximum pressure".

"The Americans have taken the policy of 'maximum pressure' which has apparently turned into 'maximum lying' due to their failures," said Mousavi.