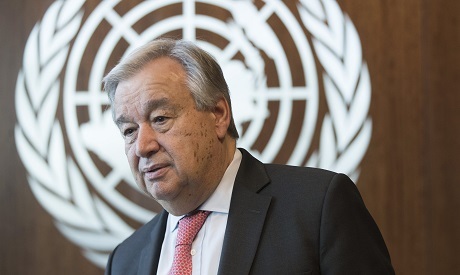 The United Nations has clinched a deal between Syrian stakeholders on the line-up of a committee tasked with drafting a new constitution for the war-ravaged country, the UN chief said Wednesday.

"There is now an agreement among all parties on the composition of the committee," Antonio Guterres said during a press conference on the upcoming UN General Assembly.

UN Syria envoy "Geir Pedersen is doing the final work with the parties in relation to the terms of reference and we hope that this will be very soon concluded," Guterres said.

Years of UN-sponsored peace negotiations have failed to end the conflict that erupted in 2011 and Pedersen has focused his efforts on the creation of a constitutional committee.

The list of its members has been highly contentious with the government of Syrian President Bashar al-Assad taking issue with some of the proposed names.

The committee is due to include 150 members, a third picked by the regime, another by the opposition and the remaining third by the United Nations.

"I hope that this will be a very important step in creating the conditions for a political solution for this tragic conflict," Guterres said.

Besides its composition, the mechanisms that will govern the committee's work are yet to be agreed upon, prompting fears among diplomats that concrete progress is still months away.

Billions of dollars in US and European reconstruction aid are conditioned on the government taking concrete steps towards a political settlement.

Al-Watan, a daily newspaper close to the regime, reported that Pedersen was expected in Damascus on Sunday.

"Mr. Pedersen is expected to review the procedures and working mechanisms of the constitutional committee after reaching an agreement on all the names," the paper said on Thursday.

He is expected to hold talks with Foreign Minister Walid al-Muallem, the daily reported.

Al-Watan said Pedersen could make a formal announcement on the constitutional committee at the UN General Assembly which opens in New York next week.

The opposition was delayed in making his selections owing to prior commitments in Hollywood.