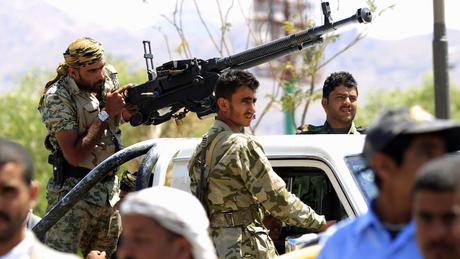 Yemen's Huthi rebels accused Saudi Arabia and its allies on Friday of endangering a fragile truce around Hodeida with strikes on four rebel targets north of the key aid port.

"The intensive raids on Hodeida are a serious escalation that could torpedo the Sweden agreement," one of the rebels' leaders, Mohammed Abdessalem, said, referring to the UN-supervised truce agreed outside Stockholm in December.

Thursday's strikes were the first reported against the Iran-backed rebels since they claimed a twin attack on Saudi Arabia's oil industry at the weekend that Washington and Riyadh have blamed on Tehran.

"The (Saudi-led) coalition will be responsible for the consequences of this escalation and we'll be watching the UN stance on this situation closely," Abdessalem added, in comments reported by the rebels' Al-Masirah television.

Rebel activity at the sites threatened maritime security in the strategic Bab al-Mandab strait as well as the southern Red Sea, the news agency said.

Shortly before the Hodeida strikes were announced, the coalition said that it had thwarted an attack by a booby-trapped, remote control boat.

The conflict has since killed tens of thousands of people -- most of them civilians -- and driven millions more to the brink of famine in what the United Nations calls the world's worst humanitarian crisis.

But the coalition, assisted by Western powers including the US, has struggled to oust the ragtag but highly motivated tribal militia that has stepped up attacks on targets inside Saudi Arabia.

But both Washington and Riyadh have ruled that out and pinned the blame on Saudi Arabia's arch rival Iran.

I'd like to hear Trump explain "the coalition, assisted by Western powers including the US".