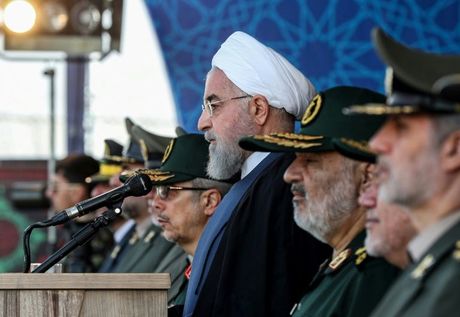 President Hassan Rouhani on Sunday denounced the presence of foreign forces in the Gulf and said Iran will put forward a peace plan, after arch-foe the United States ordered reinforcements to the tinderbox region.

"Foreign forces can cause problems and insecurity for our people and for our region," Rouhani said before a massive military parade marking the Iran-Iraq war.

Rouhani also said Iran would present a peace plan to the United Nations within days.

"In this sensitive and important historical moment, we announce to our neighbours that we extend the hand of friendship and brotherhood to them," he said.

Rouhani and top military brass saluted as row after row of soldiers marched past them in tight unison followed by an array of homegrown military hardware.

The parade showcased tanks, armoured vehicles, drones and missiles -- including the Khorramshahr said to have a range of 2,000 kilometres (more than 1,200 miles).

Tensions between Iran and the US and its allies have threatened to boil over since May last year when President Donald Trump unilaterally withdrew from a 2015 nuclear deal and later began reimposing sanctions.

The tensions escalated in the wake of devastating September 14 attacks on Saudi oil installations that Washington and Riyadh have, to varying degrees, blamed on Tehran.

Following the attacks, which caused global oil prices to spike, Trump initially raised the possibility of a military response, saying the US was "locked and loaded".

Washington later expanded its long list of sanctions against Tehran by further targeting its central bank, as Trump indicated he did not plan to strike back.

On Friday, Defence Secretary Mark Esper said the US was sending reinforcements to Saudi Arabia at "the kingdom's request", while noting the forces would be "defensive in nature".

In his speech, Rouhani called on the foreign powers to "stay away" from the Gulf.

"If they're sincere, then they should not make our region the site of an arms race," he said.

"Your presence has always brought pain and misery... The farther you keep yourselves from our region and our nations, the more security there will be.

"We are even ready to ignore their past mistakes... since today the situation is such that the enemies of Islam and the region, meaning America and Zionism, want to abuse the rift between us.

"Our logic is the logic of a Persian Gulf whose security comes from within."

The annual military parade marks the start of the week commemorating Iran's 1980-1988 war with Iraq known as the "sacred defence".

Rouhani is expected to travel to New York on Monday, a day before general debate kicks off at the UN gathering.

Tensions have flared in the Gulf since May, when Iran began reducing its commitments to the nuclear deal and the US said it was sending forces to waters near the Islamic republic in response to "indications of a credible threat" from its forces.

The US deployed an aircraft carrier strike group and a bomber task force to the sensitive waterways, before sending B-52 bombers, an amphibious assault ship and Patriot missile battery.

Trump in June authorised a military strike after Iran shot down a US drone, only to call off the retaliation at the last moment.

Yemen's Iran-backed Huthi rebels claimed responsibility, but the US says attacks involved cruise missiles from Iran and amounted to "an act of war".

Saudi Arabia, which has been bogged down in a five-year war in Yemen, has warned of "appropriate measures" once the source of the strikes is confirmed by a UN investigation.

A Huthi plan for a cessation of hostilities announced on Friday has been welcomed by the UN, but Saudi Arabia was sceptical, saying it would "judge other parties by their deeds".

The Iranian regime hasn’t understood that Arabs don’t want fanatics and heretics popping all around the Middle East. The only nation exporting terrorism is Iran, we’ve see It with Hizbala, and the 36 similar terrorist organizations in Iraq and the sleeper cells in Bahrain, Saudi Arabia amongst many more countries. Theocracy must be destroyed, the Muslim Brotherhood and clones must be exterminated full stop.